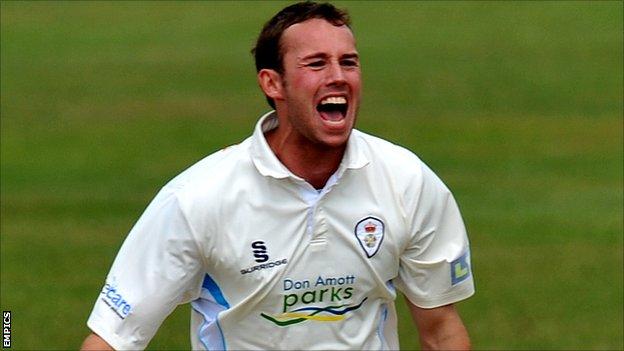 Seamer Tony Palladino has signed a new three-year contract with Derbyshire after helping them to the County Championship Division Two title.

The 29-year-old took 56 first-class wickets in his second season at the County Ground, taking his tally to 108 since arriving from Essex in 2011.

"The last couple of weeks have been fantastic," Palladino said.

"Winning the league and gaining promotion with this group of players was phenomenal."

Palladino added: "To be able to commit the next three years to Derbyshire during the prime of my career is exactly what I wanted to do."

The next step for the county is to prepare for the forthcoming return to the top tier of domestic cricket, with Palladino a key figure in Karl Krikken's squad.

"Tony has been incredible for us and securing his services for the next three seasons is a huge boost for the squad as we prepare for Division One cricket next season," Krikken said.

"He has become one of the most reliable performers with the ball on the county circuit.

"As well he has captured everything we want from a proud Derbyshire cricketer in terms of attitude, effort and endeavour."