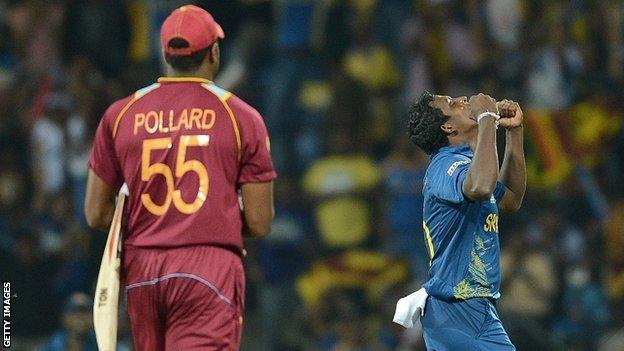 Sri Lanka are on the brink of the World Twenty20 semi-finals after thrashing West Indies by nine wickets to go top of their Super Eights group.

Spinner Ajantha Mendis was the pick of the home side's bowlers as he finished with figures of 2-16.

The run chase was turned into a procession by Mahela Jayawardene (65) and Kumar Sangakkara (39), who put on 108 to wrap up an easy victory.

The veteran duo were at their supreme best as they paced themselves through the innings and finished the job with 28 balls to spare in a flurry of fours.

After an off-colour display in a rain-shortened defeat by South Africa and a nerve-jangling 'super over' victory over New Zealand in their first Super Eights match, Sri Lanka appear to be peaking at the right time.

If they can avoid a heavy defeat by England on Monday, they will be through to the semi-finals as they seek to capture the title for the first time on home soil, but captain Jayawardene warned against complacency.

"You want to make sure you go with the right attitude and the right mentality and try to put pressure on the England boys," he said.

"We need to execute a gameplan just like we did against West Indies, not get overwhelmed by individuals and play to our strengths."

The Windies, on the other hand, looked a shadow of the side which overcame England on Thursday and will now face New Zealand on Monday with a semi-final place on the line.

"We're disappointed as we had good momentum going into this game," said captain Darren Sammy.

"Sri Lanka bowled well but we've got another game against New Zealand which we need to win now. We bowled too short and too wide - look at the way the Sri Lankans used the conditions, they bowled a touch fuller and varied their pace."

Under the lights at a packed Pallekele, Sammy's side never recovered from a dreadful start in which they lost both their big-hitting openers, Chris Gayle and Johnson Charles, cheaply and slumped to the lowest powerplay score of the tournament.

"Shades of India last night - West Indies have been thrashed with nearly five overs to spare. At the moment, Sri Lanka are revelling in being the home team, and England are probably going to have to beat them to qualify."

Charles failed to read Ajantha Mendis's googly and was stumped for 12 and Gayle was caught behind for two after slashing wildly at a Nuwan Kulasekara ball well outside off stump.

Dwayne Bravo and Marlon Samuels did their best to get the Windies back into the match with a partnership of 65, but the Sri Lanka spinners wrestled back the initiative.

Bravo holed out to long-on off Jeevan Mendis for 40 and Kieron Pollard was bowled by the brilliant Ajantha, who took his tournament-leading wicket tally to nine.

Samuels continued to carry the fight, spanking the longest six of the tournament at 102 metres as the Windies plundered 21 runs off Kulasekara's last over.

But they could only add 10 more from the final 12 balls as Malinga and Mathews rounded off a superb bowling performance.

Tillakaratne Dilshan set the tone for a routine run chase as he steered three consecutive balls from Fidel Edwards to the boundary.

His dismissal to Ravi Rampaul was of little consequence as Jayawardene and Sangakkara effortlessly steered their side home.

Captain Jayawardene scored heavily over the infield on the off side to reach his sixth international Twenty20 fifty, while Sangakkara contented himself with a supporting role.

With the end in sight, Jaywardene cracked Rampaul for four boundaries in the 15th over.

And a forgettable day for the Windies was complete when an overthrow gifted Sri Lanka the winning run.

Sri Lanka's players were later fined 10% of their match fees for maintaining a slow over-rate, with Jayawardene fined 20%.