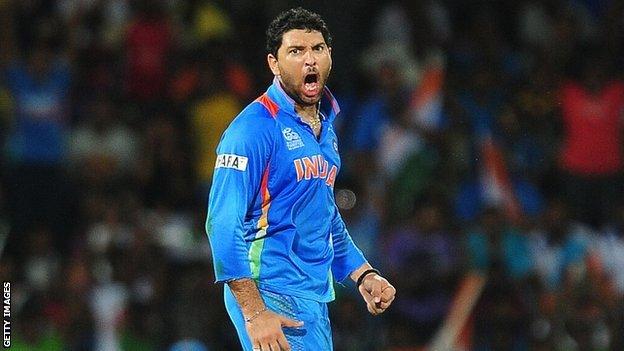 India reignited their World Twenty20 campaign with a comprehensive eight-wicket Super Eights victory over their bitter rivals Pakistan in Colombo.

Thrashed by Australia on Friday and in danger of going out of the competition, India skittled Pakistan for 128.

India lost Gautam Gambhir in the first over, but the composed Virat Kohli took the lead in a well-timed run chase.

Kohli made 78 not out as India won with 18 balls in hand to take the group to the final round of matches.

India play South Africa on Tuesday and group leaders Australia take on Pakistan, with all four teams still in with a chance of reaching the semi-finals.

The 2007 World T20 champions have now beaten Pakistan in every World Cup match between the teams, whether in 50-over or 20-over formats.

Their latest triumph owed a great deal to the decision to replace spinners Harbhajan Singh and Piyush Chawla with seamer Lakshmipathy Balaji and opener Virender Sehwag.

Balaji took three wickets as he strangled the Pakistan scoring by varying his pace and bemusing the batsmen with the occasional fast off-spinner.

For his part, Sehwag took fewer risks than usual as he helped India recover from the early loss of Gambhir - caught and bowled by Raza Hasan - in a partnership of 74 with man-of-the-match Kohli.

"It was a really important game for us, against good opposition on a slowish wicket," Kohli told BBC Sport.

"It was a perfect situation to put in a good team performance, rectifying the last performance we had against Australia which wasn't up to the mark. We moved it around really nicely and got the right result today."

After winning the toss, Pakistan made a bright start, sprinting to 17-0 off eight balls before Irfan Pathan removed the talented Imran Nazir leg before wicket with an inswinger.

Shahid Afridi, surprisingly promoted to number three, belted his first ball down the ground for four to the delight of the Pakistan fans who outnumbered their Indian counterparts in the stands.

But he succumbed for 14 attempting his first six as Suresh Raina clung onto a testing catch at deep midwicket.

Yuvraj Singh followed up with the wickets of Nasir Jamshed and Kamran Akmal before captain Mohammad Hafeez played on to Kohli's part-time off-spin after labouring to 15 off 28 balls.

"It makes such a difference when you've got something competitive on the board - 128 was never enough, Pakistan bowled pretty well but a few chances went down and they probably lost 15 runs in misfields."

A partnership of 47 off 33 balls by Shoaib Malik and Umar Akmal steered Pakistan back on course for a total of around 150.

But both were caught during a brilliant spell from Ravichandran Ashwin as India regained command.

Umar Gul could not repeat his heroics of Friday - when his 32 off 17 balls saw Pakistan past South Africa - falling to Balaji for 12 in the last over of the innings.

With such a small target to defend, it was only ever going to take one significant partnership for Pakistan to be on the ropes, and so it proved as Sehwag and Kohli sapped the life out of their opponents.

Kohli offered a chance on 42 when he slashed to backward point but Umar Akmal could not hold on to the catch as he dived to his left from backward point.

Sehwag clubbed Afridi to long-off to fall for 29, but India were not to be denied as Singh and the formidable Kohli accelerated over to the line to wrap up a resounding win.