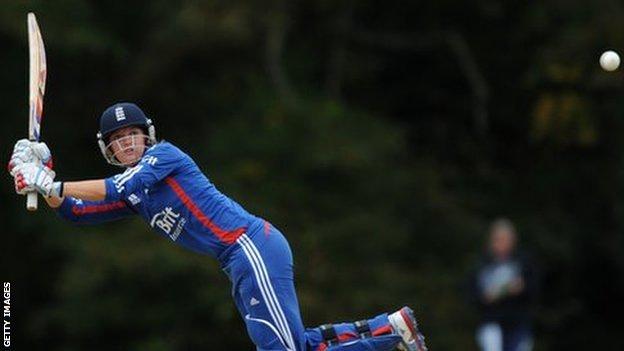 Holders Australia had set England a target of 145, with opener Meg Lanning scoring 39 runs from 31 balls.

"I didn't have the best start but it was one of those wickets where if you stayed in the runs came," said Taylor.

Wyatt walked to the crease with the score at 83-3, and Taylor paid tribute to her partner who hit 33 from 17 balls to get her side over the line.

"In the first 10 overs we were slow and behind the run-rate, but Danni came in and was phenomenal from ball one," Taylor told BBC Test Match Special. "She got the momentum back for us.

"Any game against Australia you take seriously, so it was nice to win. It was good for us to put a marker down in case we play them later in the tournament."

Australia, who are also into the final four despite defeat to England, will play West Indies in the other semi-final on Friday, with the final to be played in Colombo on Sunday before the men's final.

In the other game to decide the wooden spoon in Group A, India finished bottom of the group after a narrow one-run defeat by Pakistan.

Captain Sana Mir top scored with 26 for Pakistan after winning the toss as they reached 98-9, and India's run chase went to the final ball of the match as having needed to score 14 from the final over and four from the final ball, Nagarajan Niranjana was run out going for a third run which would have tied the game and sent it to a super over.