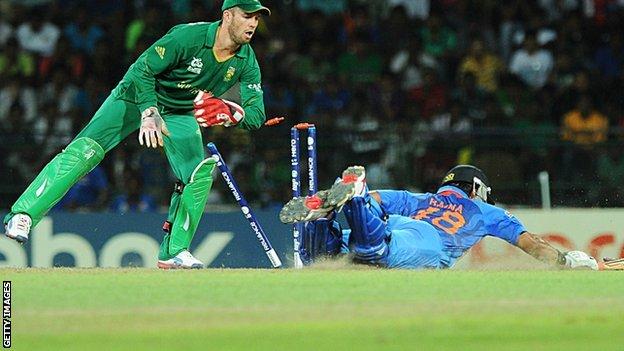 India failed to reach the semi-finals of the World Twenty20 despite beating South Africa by one run in Colombo.

After posting 152-6, India had to restrict the Proteas to 121 or fewer in order to advance on net run-rate.

But Faf du Plessis's 65 was enough to knock India out, even though Lakshmipathy Balaji bowled last man Morne Morkel with two needed to win.

"We've had an absolute cracker of a game, but many of the India and South Africa players will be asking 'when is the flight home?'. They will want to get out of there as soon as they can."

India finish level on four points with Australia and Pakistan, but with the poorest run-rate.

Australia had earlier done enough to reach the last four despite their 32-run defeat by Pakistan, a result that sealed South Africa's exit and left India knowing exactly what they had to do in the last match of the Super Eight stage in order reach the semi-finals.

Victory by 31 runs or more would have seen MS Dhoni's side go through, but they lost too many early wickets attempting to post a score that would have provided them with a big enough winning margin.

In truth, though, despite a poor start that saw the 2007 champions slip to 36-3 against the Proteas, the damage was done by a nine-wicket defeat by Australia in their opening Super Eight match, a result that did terminal damage to their net run-rate.

"If you take that Australia game out, we performed brilliantly," said Dhoni.

After the top three of Gautam Gambhir, Virender Sehwag and Virat Kohli made little impact, it was left to Yuvraj Singh and Rohit Sharma to repair the damage.

Yuvraj impressed in dishing out some brutal treatment to the South Africa spinners, twice clearing the ropes before being undone by a Morkel slower ball.

All matches in Colombo

Sharma, content to anchor the innings, then joined forces with Suresh Raina, who hit five fours in his 34-ball 45.

When Sharma was trapped lbw by the left-arm spin of Robin Peterson, Dhoni arrived to add some late impetus, taking 14 off the penultimate over of the innings.

The task to keep South Africa under 122 always seemed likely to be too great for India, but they were given hope when left-arm seamers Zaheer Khan and Irfan Pathan removed Hashim Amla and Jacques Kallis respectively.

South Africa were plunged deeper into trouble when AB de Villiers was bowled by Yuvraj via an inside edge, only for the recalled Du Plessis, playing some eye-catching strokes through the covers, to push India to the verge of elimination.

When he departed, caught at long-off to give Yuvraj his second wicket, the Proteas still needed 27 to knock India out, but when Peterson gloved Balaji for a single, Pakistan's progression to the last four at their great rivals' expense was confirmed.

After that the result was irrelevant and India's win, although dramatic at the death, will be little consolation as they head home.

For South Africa, the defeat ended a frustrating tournament, during which they lost all three of their matches in the Super Eights.

"Disappointed is not the word to describe it," said captain De Villiers. "We've let the country down and that's what hurts the most."