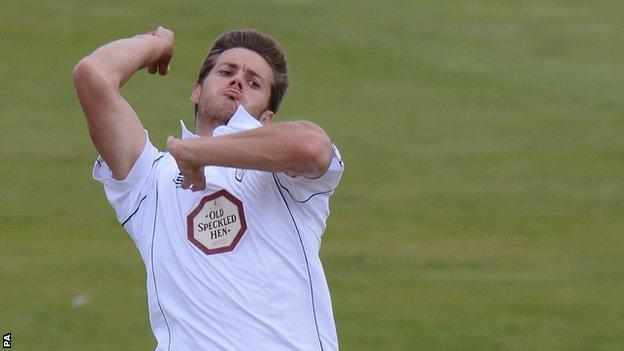 Derbyshire all-rounder Jonathan Clare has become the latest player from the 2012 Division Two County Championship-winning side to sign a new contract.

The 26-year-old said: "What the squad and management achieved has been phenomenal, yet the lads feel there's a lot more we can accomplish.

"The next few years could be something very special here at Derbyshire."

Clare, who made his first-class Derbyshire debut in 2007, joins Ross Whiteley and Tony Palladino in signing new deals following the club's promotion.

He added: "It's great to be able to say I'll be at the County Ground for at least another three seasons.

"It is a place with a real buzz and we're a squad that's growing and improving all the time; something I'm desperate to remain part of."

Head coach Karl Krikken said: "Jon has the ability to bowl quickly and accurately and when he's batting he can make first-class centuries. It's a rare combination and one we're delighted to be keeping hold of for the foreseeable future.

"He is the latest of our established cricketers to recently commit to the club, and more will follow as the implementation of our cricket strategy continues."