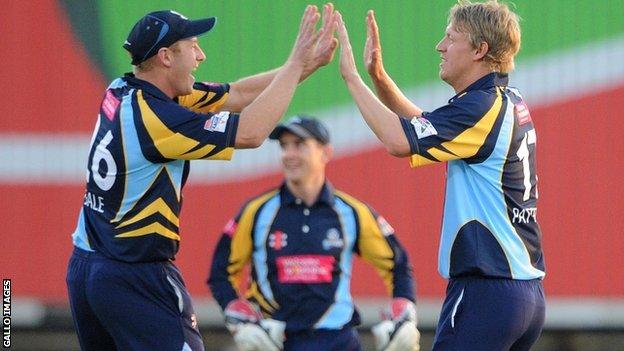 Gary Ballance blasted Yorkshire into the main phase of the Champions League T20 competition with a brilliant half-century against Trinidad and Tobago.

Ballance hit six sixes and scored 64 not out off 37 deliveries as Yorkshire reached 154-4 to win by six wickets.

Trinidad had earlier made 148-9 with Denesh Ramdin smashing 59 off 40 balls and team-mate Darren Bravo adding 45.

Tykes in the Champions League

Ryan Sidebottom (3-13) was the pick of Yorkshire's bowlers, while three Trinidad players were also run out.

Yorkshire, who won their first match in the competition by beating Sri Lanka's Uva Next by five wickets on Tuesday, made a fine start in Centurion.

They lost the toss and had to field but took three wickets in the first three overs before Trinidad were rescued by a partnership of 93 between Ramdin and Bravo for the fourth wicket.

The Tykes were without David Miller after the South African broke his nose when he was hit in the face by a bouncer from Umar Gul in the match against Uva Next.

Yorkshire looked to be missing Miller as they fell to 51-4 but Ballance, along with Adil Rashid (33 not out), guided the Tykes to victory with seven balls to spare.

Yorkshire are the only English team to reach the main phase of the tournament after Hampshire were eliminated when they lost their qualifying match against New Zealand side Auckland Aces.