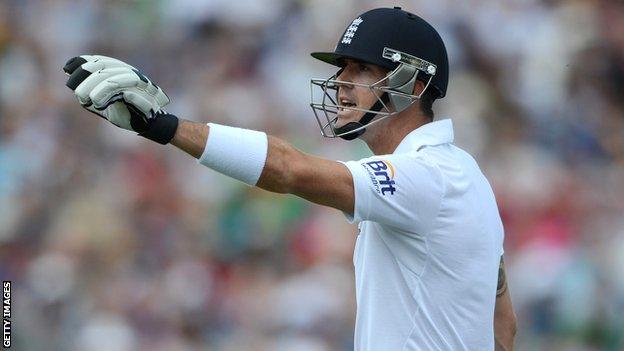 Kevin Pietersen described his dispute with England as a "horrible situation" after signing a new contract that should see him finally return to international duty.

During a turbulent five-month period, the 32-year-old retired from one-day international cricket but starred in Tests, before becoming upset by a Twitter parody account.

He later reversed his limited-overs decision but was then dropped entirely over "provocative texts" about team-mates.

Here, BBC Sport charts every twist and turn of the saga that ended on Wednesday, when it was announced the batsman is to undergo a "re-integration" period before his expected return to action.

Discontent first emerged in May when Pietersen announced his decision to retire from ODI internationals, despite scoring hundreds in each of his last two innings.

He cited the "intensity of the international schedule and the increasing demands on my body".

The England and Wales Cricket Board (ECB) insisted he also had to retire from International Twenty20 cricket, too, in accordance with their rules.

Pietersen announced he would concentrate solely on Tests, but said: "For the record, were the selection criteria not in place, I would have readily played for England in the upcoming ICC World Twenty20."

In early August, Pietersen scored 149 against South Africa in the second Test at Headingley, claiming he was in the "best form of my life".

But he then made outspoken comments at a news conference suggesting the final Test at Lord's could well be his last for England.

Pietersen was also understood to be angry at a Twitter parody account that mocked him, especially as some members of the squad followed and engaged with it.

At the news conference, he said: "I love playing Test cricket, but there are obstacles and I'll decide what happens at the end of the next Test."

Ex-England captain Alec Stewart said: "It's important to stress no player, however good, is bigger than the team and no-one is irreplaceable."

But Pietersen took the cricket world by surprise on 11 August by reversing his decision to quit limited-overs cricket in a video interview with his management company.

The interview was posted on video-sharing website YouTube on the eve of the squad announcement for the final Test.

In it, Pietersen said: "I'm not going anywhere. I want to make myself available for selection for every single form of cricket for England. I love winning for England. I can't wait to play in Straussy's 100th Test next week."

But former England captain Geoffrey Boycott said: "When you have said something that is not nice about the captain of England, you have to front up face to face."

On 12 August, Pietersen was dropped from the final-Test squad after the ECB said he had failed to provide assurances he had not sent derogatory text messages.

Pietersen, who claimed the texts were "provocative but meant as banter", said: "To say I am gutted is an understatement."

Morris said: "In the best interests of the team, he will miss the Lord's Test.

"Confirmation he has not sent derogatory texts has not been forthcoming despite timelines being set."

Three days later, on the eve of the Lord's Test, Pietersen apologised for the texts. "I truly didn't mean to cause upset or tension, particularly with important games at stake," he said.

"I apologise to Straussy and the team for the inappropriate remarks at the press conference and for the texts."

Despite the apology, Strauss described Pietersen's place in the side for the third Test against South Africa as "untenable."

Former Australian international Shane Warne had a simple solution: "'Strauss and Pietersen could have gone down the pub and had a beer.

"If they'd punched the absolute whatever out of each other to sort it out, so be it."

In late August, from professional cricket, with one-day captain Alastair Cook taking over as Test skipper.

Strauss denied the Pietersen saga had affected his decision and later revealed he had received a personal apology.

Strauss said: "I first spoke to Andy Flower about it prior to the Kevin Pietersen incident rearing its head. It just hasn't been a consideration.

"We had a good chat and Kevin apologised to me, which was great. I will have no problems meeting up with Kevin and having a beer with him, definitely."

September saw a softening in the attitude towards Pietersen, with negotiations to get him back gathering pace, but the batsman was still left out of the squads for the limited-overs matches with South Africa, the World Twenty20 and the tour of India.

Instead, he worked as a TV pundit at the World Twenty20, allowing him time to meet with representatives of the ECB.

England coach Andy Flower admitted they missed Pietersen's presence in Sri Lanka, while Cook added: "Time hopefully will be a healer and we will be able to move on, but the issues will have to be resolved."

On Wednesday, it was announced Pietersen had signed a fourth-month central contract, with a period of "re-integration" built in.

Pietersen and ECB bosses will hope that this finally draws a line under what had been a bitter and very public saga.