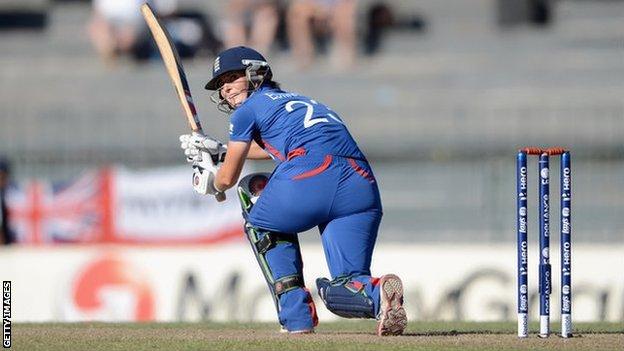 England's women hammered New Zealand by seven wickets to reach the final of the World Twenty20.

Chasing only 94 to win, captain Charlotte Edwards hit 33 and Lydia Greenway 22 to lead England over the line with 16 balls to spare.

On a slow pitch in Colombo, England restricted the Kiwis to 93-8 with spinners Holly Colvin and Danielle Wyatt taking two wickets each.

"England weren't pushed that hard, but what impressed me the most was the calmness in the way they went about the task. Sarah Taylor normally bats at a strike rate of over 100 but she was happy to go along at 65 as she knew the job could be done. The Kiwis didn't really hit their marks, particularly allowing Lydia Greenway to play nearly every ball as a sweep or reverse-sweep. I feel for New Zealand, they must be wondering what they need to do as they keep getting into these positions without getting over the mark."

England will play either West Indies or Australia in Sunday's final.

With England having beaten defending champions Australia in the group stages and completed a 4-1 series win over West Indies in September, they will start as favourites in the final regardless of their opponents.

Arriving in Sri Lanka after a 21-match unbeaten run was ended when an experimental side was beaten by the Windies, England have made comfortable progress to be the only side - men or women - to remain unbeaten throughout the World T20.

This latest victory was built on a foundation of tight bowling and excellent outfielding that sucked the life out of the New Zealand innings.

The tone was set when Kiwi skipper Suzie Bates was run out in the first over and, from there, the White Fearns were never able to build any momentum.

As England's spin quartet of Wyatt, Colvin, Danielle Hazell and Laura Marsh took all pace off the ball, only Amy Satterthwaite, with 30 from 39 balls, was able to make a meaningful contribution.

And, though Nicola Browne and Katey Martin were able to provide late impetus by taking 10 from an Anya Shrubsole over, the modest target never seemed likely to pose England any problems.

So it proved as Edwards and Marsh were able to compile a risk-free opening stand of 32, finding the boundary as many times between them as New Zealand did in their entire innings.

When Marsh fell, well caught by Morna Nielsen off Sian Ruck, Taylor arrived to to snuff out any suggestion of a Kiwi fightback, hitting a Nielsen full toss for the only six of the match.

Edwards, after becoming the leading runscorer in the tournament, fell to a catch at point off the leg-spin of Erin Birmingham, while Taylor was reprieved when stumped off a Frances Mackay no-ball.

But, in a stand of 40 with Greenway, Taylor put England one win away from regaining the trophy they won in 2009.