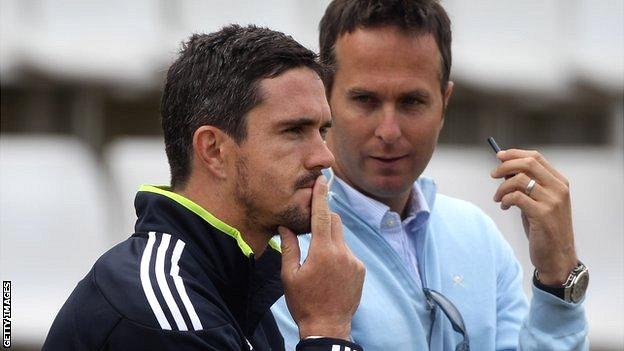 Former captain Michael Vaughan says Kevin Pietersen must "make a speech and have a beer" with his team-mates if he is to be accepted back into England's dressing room.

Pietersen, 32, has signed a new four-month England contract but must undergo a "reintegration" period before he returns to the side.

Vaughan also believes Pietersen must "behave better" than he did during a controversial summer, adding: "England are lucky to have him, but the team will want actions."

Pietersen was dropped from the national set-up in August for sending "provocative" text messages to opposing players during the Test series against South Africa.

But the Surrey player, who now has a central contract which could be extended until September 2013, apologised to ex-captain Andrew Strauss and the ECB accepts the texts were not derogatory about the former captain.

Speaking to the BBC, Vaughan said Pietersen deserved a second chance ahead of the forthcoming Test series in India, but needs to repair his fractured relationship in the dressing room.

"Now he has got a four month trial period and the only way to find out is to go into the dressing room, make a speech, get round with some of the players he has had issues with, and have a beer.

"He needs to iron it all out because you want to see the best players playing. The way he speaks to the team, media conferences and statements are just words, the team will want actions. They will want to see how he behaves and how he is around the players.

"I do believe people do deserve a second chance, particularly in this case. Pietersen back in an England shirt will be a good thing in the long run.

In some ways, the Pietersen situation is similar to the Carlos Tevez soap opera last season. Just a few months after his manager said he would never play for Manchester City again, Tevez came back and played a vital role in the team winning the Premier League.

Pietersen's new central contract will cover all forms of the game, while the decision over an extension - to make it a full-year contract - will be made by team director Andy Flower, who will also decide when the "reintegration" process is complete.

Matthew Hoggard, who played alongside Vaughan and Pietersen for England, said: "I sat down with Kevin Pietersen in Australia in 2006 I think it was. There were things that Kevin was doing that I didn't really like so I sat down with him over a beer in a bar and said 'look Kev, I don't agree with this, that and that, we need to have a chat'.

"We had a chat and we came out of that bar with a lot better feelings, a lot better friends and got on with that. I think that's what needed to happen two months ago."

Former England bowler Angus Fraser told BBC Sport: "Everyone will be looking around to see how he gets on with the players and what sort of environment it's creating in the dressing room.

"Clearly there were incidents that took place and you could tell by the language some England players used that they weren't enjoying his presence in the dressing room and were quite happy when he wasn't there. They will have to change their tune now.

"The real balancing act that Andy Flower has got to look at is the positive effect Kevin Pietersen can have because of the way he bats and the runs he scores, weighing that up against it having any detrimental effect on other players."

England legend Sir Ian Botham told Sky Sports that the matter should have been sorted out "months ago".