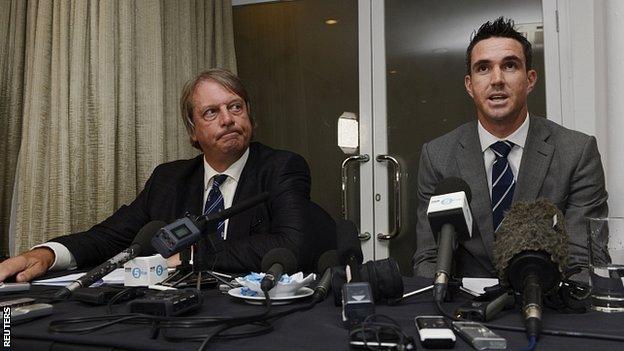 The announcement of Kevin Pietersen's new central contract and his "reintegration" into the team is great news for English cricket.

Whatever people may think of him as a person, and whatever they may believe or not believe about what has or hasn't happened, no-one can dispute that England are a better team with Pietersen in it.

The past few weeks have been ugly and unnecessary and have not done anyone any favours. Pietersen will and should take the majority of the blame, but at the same time the dressing room and the hierarchy need to ask themselves why it was allowed to get to this.

"It is very telling that England were the only major side at the World Twenty20 without a regular Test batsman in their top six. The lack of experience in the batting line-up proved to be our undoing and I would seriously consider bringing back Pietersen, Ian Bell and Matt Prior. You would then have England players comparable to Chris Gayle (Pietersen), Mahela Jayawardene (Bell) and Mahendra Dhoni (Prior). I'm fully aware that Prior and Bell do not have records to compare with Jayawardene and Dhoni, but with their undoubted ability, I see no reason why they can't come back better players in this format in the game."

English cricket should learn a lesson from this sorry saga and ensure that nothing like this ever happens again.

Anyone who has played team sports knows that it won't always be a bed of roses in a dressing room. There will be times when people disagree, voices are raised and opinions are expressed, but you must always know and understand what the common goal is. And the common goal here is for England to be as successful as possible and for everyone to know what the England team stands for.

When there are issues, they need to be confronted straight away and ideally nipped in the bud. If they are allowed to fester and snowball, then situations will arise when everyone suffers.

You can have a conversation to start with, and if that doesn't work you can have a more direct discussion where everything is clearly laid out. If that doesn't work I'm not against someone throwing a right-hander or grabbing the individual by the throat because then nobody can misinterpret the seriousness of the crime. I've seen that in the past, and it tends to sort things out.

I don't know exactly what Kevin's "reintegration" will entail, but I don't envisage any immediate problems.

We have to accept there will still be incidents in the dressing room. Whether that is between Pietersen and this so-called clique, or two of the nicest people you will ever meet in Jonathan Trott and Ian Bell, it is imperative that everything is kept in-house and not aired for public consumption.

In some ways, it is a similar situation to the Carlos Tevez soap opera last season. Just a few months after his manager said he would never play for Manchester City again, Tevez came back and played a vital role in the team winning the Premier League.

The miracle of Medinah

"Hats off to Europe's golfers for pulling off the mother of all comebacks to win the Ryder Cup on Sunday. The year 2012 will go down as one of greatest in British sport, but for pure sporting drama, the Ryder Cup has to be right at the very top."

When Kevin does return - and I hope that will be in India in November - it won't be easy for him. Every camera will be zoomed in on him, every microphone will be shoved under his nose, and everyone will be looking out for the slightest slip-up. But the sooner the England dressing room is a united group again, the better it is for everyone.

It's a good time to wipe the slate clean because they have a new captain in Alastair Cook, who will have his own ideas about how he wants to take this team forward. I hope everyone buys into his ideas and principles because we need to make sure that this squad is together for the long term.

I want to see senior players like Pietersen, Graeme Swann, James Anderson, Trott and Matt Prior playing for England right through to the next World Cup in 2015.

This is a good group of players who have had success. They have had a hiccup in recent months but they still have the ability to dominate world cricket. To do that you have got to have a great team environment and you have to have your best players playing with, and for, each other.