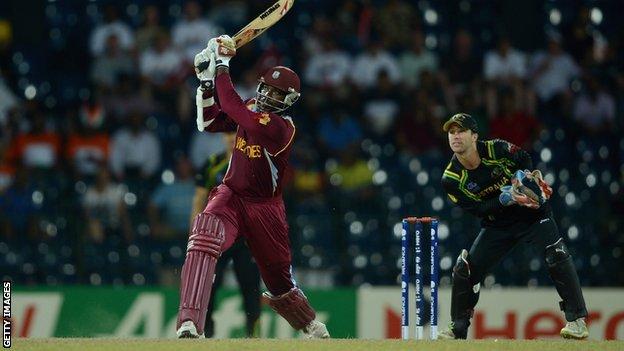 Chris Gayle and Kieron Pollard produced a superb display of power hitting as West Indies thrashed Australia to reach the final of the World Twenty20.

Despite a defiant 29-ball 63 from captain George Bailey, Australia never recovered from a poor start, crumbling to 131 all out to lose by 74 runs.

West Indies will in Colombo on Sunday.

It was a phenomenal display from West Indies, based around another exhibition by the peerless Gayle.

"The reason Gayle is so good is that normally a batsman puts the bad ball away for four, but Gayle doesn't even have to hit the ball cleanly and it goes for six. He's so powerful, the grounds aren't big enough for him."

Despite facing only 41 balls in the 20-over innings and requiring treatment midway through for a side strain, the left-handed opener still managed to get within 25 runs of a century, smashing six sixes and five fours with a strike rate of 182.

Marlon Samuels helped set the tempo with a breezy 26 and Dwayne Bravo hit three towering sixes in his 37 off 31 balls.

However, it was Gayle and Pollard, who plundered 63 runs off the last four overs, who really demoralised Australia.

After watching the previously economical Mitchell Starc carted for 17 in the penultimate over, Bailey took a gamble by throwing the ball to left-arm spinner Xavier Doherty.

It proved a costly mistake as Gayle heaved a six over midwicket before Pollard helped himself to three maximums in a row.

He holed out at long-off off the last ball of the innings to fall for 38 off 15 deliveries, but the damage had been done.

Australia's best chance of joining their women's team in the final by completing the joint second highest successful run chase in the tournament's history was always likely to lie with prolific openers David Warner and Shane Watson.

So when both were bowled by leg-spinner Samuel Badree inside the first five overs, the writing was on the wall.

Warner was dismissed off the last ball of the first over when a television replay confirmed that a googly had shaved his off stump.

After Mike Hussey top-edged a return catch to Marlon Samuels following a rapid 18, Watson was castled for seven by one that fizzed on.

Ravi Rampaul took two wickets in three balls - Cameron White caught down the leg side and David Hussey caught and bowled off a leading edge - before Matthew Wade was caught sweeping to leave Australia reeling on 43-6.

Bailey, not renowned for his ball-striking, led a one-man counter-attack, but with the required run-rate creeping above 14 per over, his innings was nothing more than a footnote to proceedings.

So it proved as Pollard removed Pat Cummins and Bailey in the same over, Brad Hogg was stumped off Sunil Narine and Rampaul bowled Starc to wrap up a phenomenal win.

The Windies are through to their first global final since 2004, when they beat England at The Oval to win the Champions Trophy.

Tthey will face a severe test against Sri Lanka, who, in Lasith Malinga and Ajantha Mendis, have two of the most successful bowlers at the tournament, and will be cheered on by a raucous home crowd.