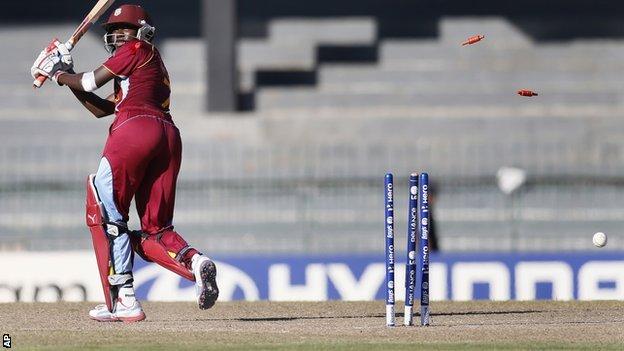 Australia had earlier looked in trouble, slipping to 14-2 and 36-3.

But Lisa Sthalekar (23) and Alex Blackwell (21) rebuilt and Jodie Fields and Rachael Haynes took them to 115-7.

Despite the late flourish that saw 29 come from the final three overs, Australia's score looked within reach of a powerful West Indies top order.

"That was a pretty accomplished performance by Australia. They didn't play out of their skin but they did enough. Australia and England - that's a mouth-watering final."

But too often the Windies were guilty of playing of playing across the line, with captain Merissa Aguilleira trapped lbw by Hunter in between Stafanie Taylor and Deandra Dottin both bowled by the impressive Perry.

After Shemaine Campbelle was run out backing up by Perry, West Indies could only limp through the rest of their innings.

"The batting fell apart," said Aguilleira. "Perry bowled extremely well so we have to say hats off to them.

"There is a lot of improvement in the team and we are looking forward to pushing forward."

Australia have the chance to retain the trophy they won in the Caribbean in 2010 against an England side that beat them by seven wickets in the group stages.

"Bring it on. All the girls are really keen," said Australia skipper Fields. "There were a few nervous moments but we came out on top.

"It would have been nice to get a few more runs - we were aiming for 140 - but we knew we had a great bowling side."

England are the only other nation to have won the Women's World T20, having lifted the trophy on home soil in 2009.