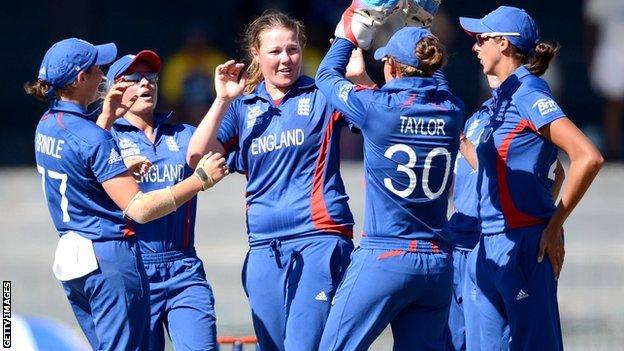 England women's captain Charlotte Edwards says she is delighted that her side are one match away from achieving their "goal of the last 18 months".

The 2009 Women's World T20 champions reached the final of this year's competition by cruising past New Zealand by seven wickets on Thursday.

With the final on Sunday, Edwards, who top-scored with 33 in Colombo, said: "It's great to be in a World Cup final.

On a slow pitch in Colombo, England restricted the Kiwis to 93-8 with spinners Holly Colvin and Danielle Wyatt taking two wickets each.

Chasing only 94 to win England amassed the required total with 16 balls to spare, and Edwards told BBC Sport: "It was always going to be a tough game against New Zealand.

"To play in the manner we did - to bowl the way we did and put pressure on them early on - was fantastic and I'm really pleased for the girls.

"We came here to win five games of cricket and we've got one more to win. We've got great experience and these girls play great under pressure, so hopefully we can get it done."

Colvin, who finished the semi-final with impressive bowling figures of two wickets for just 14 runs off her four overs, acknowledged that England might be expected to triumph in the final on Sunday: "We have to live with the 'favourites' tag.

"People say it might add a bit of pressure but I think that's good, because it means we're the opposition to beat and we're feared by other teams. We have to see that as an advantage."

Reigning champions Australia face West Indies in the other last four match on Friday, but Colvin insisted England's focus must be internal over the next 48 hours.

"We'll watch tomorrow and see how the two teams do," she said. "But we need to prepare ourselves rather than prepare to how other teams play.

"We're absolutely delighted. We've been aiming to get to that final. We have done it, and all the girls are over the moon."