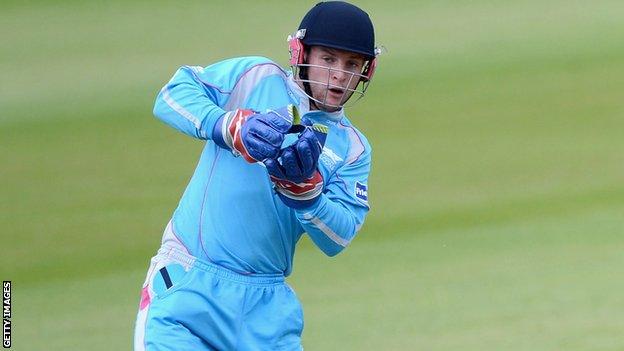 Poynton, 22, figured in all but two of the 16 games en route to the title, when he was forced out by injury and replaced by loan man Richard Johnson.

But he faces competition next summer, Johnson having now returned to Derby from Warwickshire on a three-year deal.

"Derbyshire is the county I've represented since I was 11 throughout the age groups," said Poynton.

"Committing to another three years on the staff is exactly what I wanted. What we achieved last season is something we're all proud of."

Aside from helping Derbyshire win the Division Two title to bring the county top flight cricket for the first time in 13 years, the individual highlight of Poynton's summer was the part he played in almost rewriting the cricket history books in August.

Along with skipper Wayne Madsen, who also made a career-best, Poynton hit his maiden first-class century as they put on 259 for the ninth wicket against Northants - coming within 22 runs of beating the oldest partnership record in first-class cricket.

Head coach Karl Krikken said: "To be thrown straight into first team wicketkeeping duties with limited first-class experience was a tough ask, but Tom has developed fantastically this summer.

"He's a home-grown cricketer that we've backed to succeed and he's coming good for us by developing into an established first-class player."

The squad at the County Ground was among the youngest on average Division Two, with 21-year-old Dan Redfern, Alex Hughes and Ross Whiteley, both 23, also prominent.

"With the average age of the squad so young," said Poynton, "we have serious ambitions to build on that success over the next few years.

"The camaraderie is incredible. I'm delighted to stay a part of it for at least another three years."