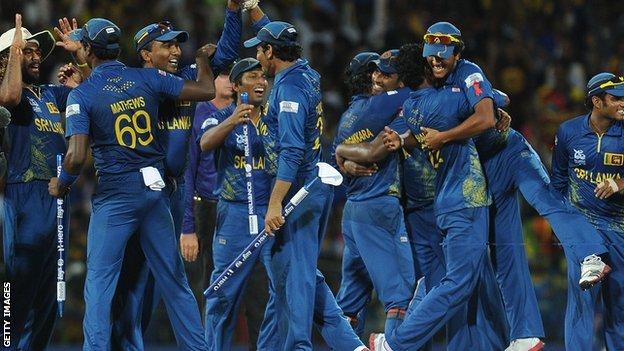 Sri Lanka captain Mahela Jayawardene said Rangana Herath was a "champion" after the spinner's display in the World Twenty20 semi-final.

Left-armer Herath took 3-25 on his recall as the hosts beat Pakistan by 16 runs to earn a place in Sunday's final.

"He has delivered when the team needs him most and he did the same again today," said Jayawardene.

"It was a tough call to keep out Akila Dananjaya on his birthday, but we all know what a champion bowler Herath is."

"We didn't know which Pakistan team would turn up today - if it would be the free-flowing, high-scoring Pakistan, or the one that keeps playing and missing, and playing strange shots. I think the difference in the game was the way Jayawardene played - he was exceptional, even though Dilshan was a bit scratchy at the other end. The fact that they were no wickets down after 10 overs allowed them to go for it. Whereas with Pakistan, once Hafeez was out there was nowhere to go from there."

Batting first on winning the toss in Colombo, Sri Lanka were only taken to their winning score of 139-4 when Angelo Mathews and Thisara Perara combined to take 14 runs from the final over of the innings.

"I think we were about 15 runs short although 140 was a par score on this wicket," said Jayawardene, who made 42. "We made quite a few mistakes in the field but that did not cost us a great deal."

Along with Herath's haul, Ajantha Mendis and Angelo Mathews each took two wickets to restrict Pakistan to 123-7 and book a meeting with Australia or West Indies.

As well as the chance to add to their successes at the 1996 World Cup and 2002 Champions Trophy, Sri Lanka have the opportunity to reverse a run that has seen them lose three major limited-overs finals in the last five years.

"We need to approach the final as any other game," Jayawardene told BBC Sport.

"We have got a good habit of getting into finals, which shows we are doing something right.

"Now we have to try and execute a good game plane and be ruthless, that's the most important thing."

"It was disappointing not to have a partnership going because 140 was certainly gettable on this pitch," said Hafeez.

"But I am still proud of my players because as a team we played well in the tournament.

If anything needs to be worked on, it is the way we chase targets. We need to plan a way to get where we want to."