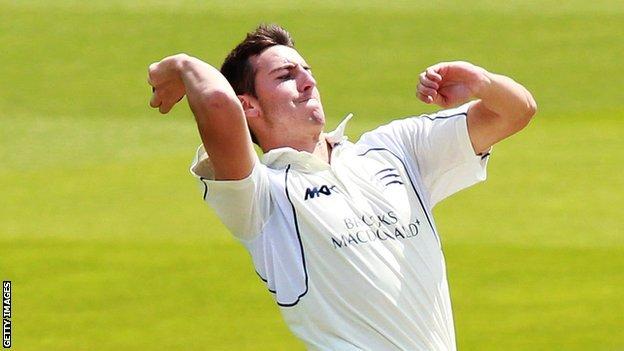 Middlesex seamer Toby Roland-Jones has signed a new five-year contract to keep him at Lord's until the end of 2017.

The 24-year-old Ashford-born paceman has taken 128 first-class wickets since joining the club three years ago.

"Toby committing his long-term future to Middlesex is another great sign for the club," said director of cricket Angus Fraser.

"My cricket has developed enormously since I joined back in 2009," added Roland-Jones.

"I hope to continue to improve under the excellent coaching and environment Middlesex has to offer.

"I am delighted to commit my future to Middlesex. They showed faith in me to begin with when I left university and I have thoroughly enjoyed the past three seasons with the club.

"Middlesex have made a lot of progress in the last two or three years and the future is looking bright. I hope to play an integral part in any future success the club has."

Roland-Jones has also taken 43 wickets in limited-overs cricket at average of 20.89.

His progress has resulted in him being picked for England's winter performance programme.

"He thoroughly deserves the success that is coming his way and we hope that over the course of the next couple of years he can force his way into the full England team," said Fraser.

"Toby has become an outstanding cricketer and a fine young man."