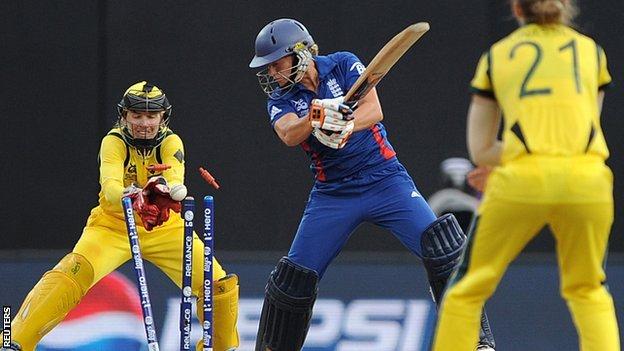 England failed in their bid to regain the Women's World Twenty20 title, losing by four runs to Australia.

Chasing 143, England slipped to 63-4 but still had hope with 16 required from the final over in Colombo.

Earlier an opening stand of 51 between Meg Lanning and Alyssa Healy was built on by 45 from Jess Cameron as the Aussies posted 142-4.

In successfully defending the crown they won in 2010, Australia inflicted only a second defeat in 26 T20 internationals on Charlotte Edwards' England side.

That run had seen England beat the Southern Stars by seven wickets in the group stages, chasing down 145 with nearly two overs to spare in Galle.

However, on a slower Colombo pitch, England were unable to match the high-quality strokeplay displayed by Lanning, Healy and Cameron, with the regular fall of wickets sucking any momentum out of their reply.

Having been put under little pressure throughout the tournament, the 2009 champions could not respond as Australia took the initiative in the early stages of each innings.

First, after Edwards won the toss and elected to field, Lanning and Healy dished out some brutal treatment to pace bowler Katherine Brunt.

"Consistency of selection and tactics have helped England's success but in the end there were only four runs in it. I don't think England were 100% on the mark today, the bowlers didn't quite bowl to their plans and the batters weren't great at rotating the strike. It's great for women's cricket to get an exciting final to get to the last ball, so well done to the lower order for keeping England in it."

Then, as England set about their run chase, their inability to rotate the strike put them behind the required run-rate despite regularly finding the boundary.

After Laura Marsh fell, much rested on the shoulders of Edwards and Sarah Taylor, the leading runscorer and number-one rated batters in T20 internationals respectively, and they added 24 in even time.

But Edwards was held in the deep on the leg side off the spin of Lisa Sthalekar, Taylor was caught behind off Ellyse Perry and, with Lydia Greenway falling soon after, it was left to a lower order which had rarely been pressed into action to try and revive England's hopes.

With Jenny Gunn launching a straight six, Colvin and Danielle Hazell still had the chance to pull off the most dramatic of wins from the final over.

Hopes were raised when Osborne's full toss was called a no-ball, and Jonassen then dropping Colvin from the next ball. However, when the Sussex spinner was run out, England needed six from the final ball of the match.

Hazell was unable to clear the ropes, leaving Australia as the first side to win two women's World T20 titles and the first to retain the trophy.

Theirs was a victory based on the top-order brilliance of Lanning, Healy and Cameron, whose assault on the England bowling capitalised on Edwards' decision to bowl first.

After Healy and Lanning attacked the new ball, Cameron mixed power with creativity to ensure England's spinners were unable to replicate the success they had throughout the tournament.

Left-armer Colvin did impress, however, and after she had Cameron caught on the straight boundary for her second wicket, England were able to rein Australia in.

Only 23 came from the final four overs, but the damage had already been done.