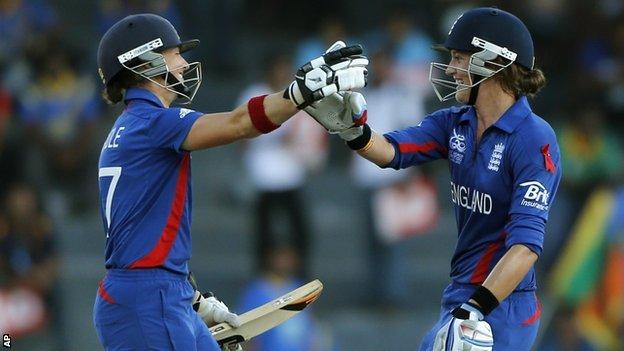 Former international Ebony Rainford-Brent says the disappointment of the 2010 World Twenty20 has helped England's women to this year's final.

England were knocked out in the group stages two years ago, but now meet Australia on Sunday for the chance to regain the title they last won in 2009.

"They rose to the top in 2009, but were under pressure to replicate that in 2010," Rainford-Brent told BBC Sport.

Path to the final

"Now they have learned how to handle that pressure."

They have been beaten only once in their last 25 T20 internationals, that defeat coming when an experimental side was beaten in the final match of a 4-1 series win over West Indies.

Charlotte Edwards' side beat Australia by seven wickets in the group stages, but Rainford-Brent believes the defending champions will provide a sterner test in the final.

"After England, Australia are the best team in the competition," said the 28-year-old, who was part of the squad that won the 2009 World Cup.

"They are a good, well-rounded side and have some of the best players in the world.

"England are definite favourites but Australia won't lie down, they will be pumped up and ready to go."

Rainford-Brent also had praise for captain Edwards, the leading runscorer in T20 internationals who led England to both the World Cup and World T20 in 2009.

"She has led England to the greatest successes they have ever had," said Rainford-Brent. "She knows herself, her cricket and her team very well.

"She leads from the front, going out there and doing the things she asks he players to do. Because of that, the players respect her."

With England looking to win a third major trophy in three years, Rainford-Brent identified another opportunity to raise the profile of women's cricket.

"We won the T20 on home soil, but winning the World Cup in Australia did just as much for the women's game," said Rainford-Brent, who played 22 one-day and seven Twenty20 internationals.

"The more success England can have, the better it is for the game in the UK.

"But also, if Sunday's match is a good contest between England and Australia it will do masses for the global game."