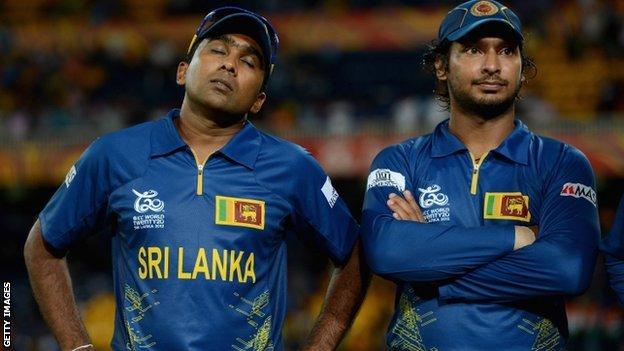 Sri Lanka restricted West Indies to 137-6 but then collapsed to 101 all out as they fell to a 36-run defeat in front of their fans in Colombo.

Jayawardene, 35, who was Sri Lanka's top scorer with 33, said he would still be available for Twenty20 selection.

The batsman also confirmed his commitment to lead the Test and one-day international teams.

"It is not a surprise but I had a chat to the selectors before this tournament started. I was going to step down from T20 captaincy after this World Cup," Jayawardene said.

"I personally feel that for Sri Lanka going forward, I think we need a younger leader. It's a great opportunity for somebody to start in that T20 format."

He led Sri Lanka in 19 Twenty20 matches, winning 12 and losing six with one tied.

The first world title for the West Indies since the 50-over World Cup triumph in 1979 also handed Sri Lanka their fourth defeat in a major final since 2007.

Jayawardene said: "I'm very disappointed for the fans we couldn't give them what we wanted but I'm very proud of the boys for the way they played the entire tournament.

"We have been playing some really good cricket but unfortunately we have not been able to cross that hurdle so it hurts, as a player, as a cricketer, as an individual, it hurts a lot.

"We just need to move on, see how well we could get over this, get back on and keep fighting again, that's the most important thing."