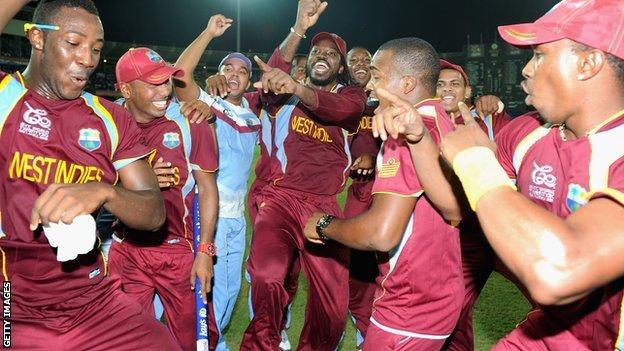 I have not seen for some time a West Indies team as united and focused as the one that beat Sri Lanka to claim the World Twenty20 in Colombo.

It's great news for West Indies cricket and hopefully the win will rejuvenate some enthusiasm amongst Caribbean cricket lovers.

On the other hand, you have to feel sympathy for Sri Lanka, who buckled under the expectation of the home fans.

"People will rejoice that Darren Sammy has got something to show from his years in charge of the West Indies. He's a delightful man, they've managed to reintegrate Chris Gayle into that side and they've had a wonderful tournament."

They will de disappointed they were unable to chase 138, while Mahela Jayawardene and Kumar Sangakkara will be devastated to have lost a fourth successive major final, especially one that was so clearly theirs for the taking.

Having said that, we have worthy champions in the Windies, a side I looked at the beginning of the tournament and picked as potential winners.

Led by the intelligent and enthusiastic Darren Sammy, they had the perfect group of players to choose from to win a T20 tournament - powerful hitters and an embarrassment of riches when it comes to bowling options.

Of course, one of the all-rounders at the disposal of Sammy is Marlon Samuels, who is one of the most improved cricketers in the world over the past six months.

His knock was the turning point of one of the most remarkable T20 matches I have ever seen.

At the halfway stage of the West Indies innings, no-one seemed to know what they were doing and if it had not been for Samuels they would not have won the game.

Samuels' form began on the tour of England, providing a launching pad for what we have seen in Sri Lanka.

He has been everywhere in this tournament, batting very well and bowling at key moments, even in the Super Over of a must-win game against New Zealand.

In the final, Samuels' hitting turned around a hopeless cause for West Indies, one that looked to be entirely of their own making as they seemed to take a circumspect approach after seeing the awkward nature of the pitch in the women's final.

Despite the track, Australia's four-run win over England was an excellent example of how exciting women's cricket can be, a fine game of Twenty20 cricket.

England had been the best team in the tournament but, as captain Charlotte Edwards admitted, they were below-par in the final and Australia were worthy winners on the day.

It was a shame the women's tournament did not attract big crowds, which was partly down to the long gap in between the men's and women's games, and that perhaps needs to be shortened in years to come.

Apart from that, I thought Sri Lanka hosted an excellent tournament, one that ran very well.

Looking into the future, I do not think the format of the World T20 needs altering because it's fine as it is.

There were some complaints earlier in the tournament about meaningless games involving some of the less-established nations, which led to suggestions that points should be carried forward from the first round to the Super Eights.

I think that would be a mistake, because you have to make teams win the games that matter. If you do that, you will progress and if you don't, you will get knocked out.