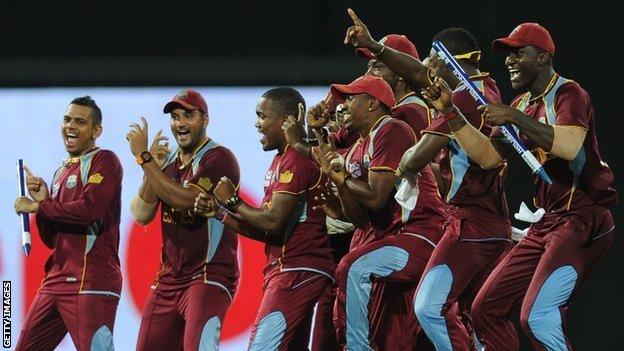 The fourth edition of the men's World Twenty20 ended in a blaze of burgundy as the West Indies celebrated their triumph over hosts Sri Lanka in the final.

That brought an end to three weeks of switch hits, Dilscoops and mystery spin, but who were the biggest winners and losers, how is Twenty20 evolving and what did we learn about the state of the international game?

The Windies are back

Only a cricketing curmudgeon would have failed to raise a smile while watching the Windies players gyrate with joy as they performed the "Gangnam" dance on the outfield of the R Premadasa Stadium on Sunday night.

Just as the sorry decline of a sporting superpower has been depressing to watch, the unmistakable signs of revival are a thrill to behold.

With Chris Gayle announcing his return to the Test team with 150 against New Zealand in July, Marlon Samuels a player reborn after his two-year ban and Sunil Narine and Kemar Roach emerging as exciting bowling prospects, suddenly the Windies seem to have a group of motivated players capable of great deeds in all forms of the game.

The biggest difference between England and their World T20 rivals was the absence of an established Test batsman in the top six.

We all know why Kevin Pietersen was not involved, but have Ian Bell and Alastair Cook not shown through their triumphant returns to the one-day side that they have what it takes to be effective in all three formats?

Players like Mahela Jayawardene, the second top run-scorer in the tournament, Virat Kohli and Mohammad Hafeez have proved that orthodox cricket shots and old-fashioned innings-building can be vital attributes in an successful Twenty20 team.

When Twenty20 was invented, spin bowlers were widely expected to provide cannon fodder in a game geared towards big-hitting batsmen.

The reality, emphatically underlined at the World Twenty20 in Sri Lanka, is that top-class twirlers are often the most effective weapons in any captain's armoury, bamboozling batsmen with their variety of deliveries and inducing false shots in players feeling the pressure to score off every ball.

Ajantha Mendis, Sunil Narine and Saeed Ajmal finished in the top five wicket-takers of the tournament, while Indian duo Harbhajan Singh and Piyush Chawla inflicted England's latest humiliation at the hands of the turning ball.

Spinners were so influential that they were increasingly asked to open the bowling despite the Powerplay fielding restrictions, and when Windies' decisive Super Eight game with New Zealand came down to a "Super Over", captain Darren Sammy turned not to seamer Ravi Rampaul, but to the occasional off-spin of Marlon Samuels, resulting in a victory with a ball to spare.

Depending on your perspective, either the most exciting or worrying aspect of Twenty20 is the way it is changing the game of cricket as we know it.

The reduced format increases the value of every run, prompting batsmen to develop new shots and bowlers to devise new ways of stopping them from scoring.

There were scoops, ramps and switch hits galore and the unforgettable look of disapproval on India captain Mahendra Singh Dhoni's face when Afghanistan wicketkeeper Mohammad Shahzad successfully emulated his trademark "helicopter" shot during the group game between the teams.

Bowlers were just as innovative, with seamers like Lasith Malinga and Shane Watson regularly sending down six distinctive deliveries, from slower ball bouncers to leg stump yorkers, in the space of a single over.

New Zealand's Tim Southee emerged as a specialist death bowler, mastering the art of pitching the ball far enough outside off stump to be difficult to hit, but not far enough to be deemed a wide.

Although much shorter and sweeter than the 50-over World Cup, the World Twenty20 still contained structural flaws that could be addressed before the next edition.

In the initial group stage, the game between the two established nations was generally scheduled after they had both beaten the minnow, meaning it became little more than a warm-up match for the Super Eights.

Indeed, any potential for the match to still carry significance was taken away by the decision to pre-determine the Super Eights, meaning all four group winners ended up in the same pool.

Never write off the Aussies

Australia came into the tournament ranked ninth in the world with several pundits doubting whether they would win their first game against Ireland, let alone challenge at the tournament.

But Australians are nothing if not competitive, and after sweeping aside the Irish and West Indies, they hammered South Africa and India to storm into the semi-finals.

A heavy defeat by the Windies ended their campaign but not before Shane Watson, David Warner, Pat Cummins and Mitchell Starc had showcased the talents which Australia fans hope can help win back the Ashes next year.

They may have lost three top players to a spot-fixing scandal and one - albeit briefly - to a failed drugs test, but Pakistan's capacity for churning out talented cricketers is just a strong as their tendency to self-destruct.

Nasir Jamshed, 22, hinted at a bright future in Test cricket with two half-centuries of class and authority, while 22-year-old slow left-armer Raza Hasan's economy rate of 4.93 was the best of any bowler in the tournament.

The emergence of a successful cricket team from war-torn Afghanistan is testament to sport's ability to unite and uplift.

Although they did not manage to win a match, they showed enough potential in a noble defeat by India to suggest they could become a fixture in future global events and even spring a surprise or two.

With more exposure to a high level of cricket, perhaps through contracts with English county sides, players such as left-arm paceman Shapoor Zadran and all-rounder Mohammad Nabi could have big futures ahead of them.

Anyone who witnessed the silky smooth bowling action of Australia's Ellyse Perry - likened to Glenn McGrath by BBC cricket correspondent Jonathan Agnew - the raw power of West Indies batter Deandra Dottin, or the athletic fielding of England's Lydia Greenway, can be in no doubt as to the improving standard of international women's cricket.

Scheduling double-headers with the men's matches increased the profile of matches and the high-scoring final kept viewers enthralled right until the final ball.

With increased funding outside the established core of competing nations, the women's game can only get stronger.