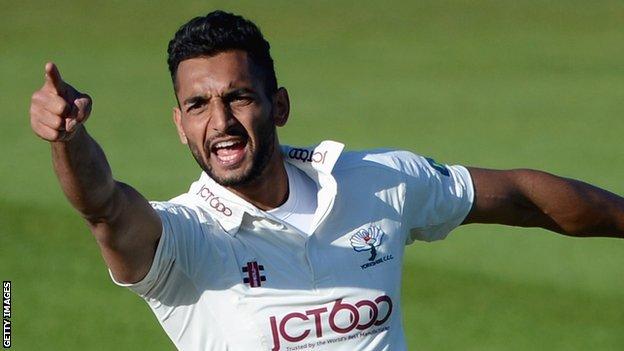 The 27-year-old has played one Test, 11 one-day internationals and three Twenty20 internationals, last appearing for England in March 2011.

He spent much of the 2012 season on loan at Lancashire after being told he was free to leave Yorkshire.

"As a seam bowler, there is no better ground to play at than Trent Bridge," he said of his move to Notts.

"Hopefully, playing alongside so many England players and performing well for Notts will put me back in the limelight."

*Shahzad's other three first-class games were for an England XI on tour, and England Lions

Huddersfield-born Shahzad became the first British-born Asian to play for Yorkshire when he appeared in a limited-overs match while still a teenager in 2004, made his first-class debut two years later and broke into the England squad early in 2010.

His only Test appearance came in an innings victory over Bangladesh at Old Trafford later that year, taking 3-45 in the first innings, and he was a non-playing member of the England squad that won the Ashes in Australia in 2010-11.

He featured in two World Cup matches last year before his participation in the tournament was curtailed by a hamstring injury, and has not pulled on an England shirt since then.

Notts director of cricket Mick Newell added: "I spoke to Ajmal at the back end of the season, he's been aware of our interest for some time and we see him as a major signing for all forms of the game.

"His white ball record in particular is excellent and will give us some experience to replace Darren Pattinson as well as opening the bowling for us in four-day cricket and providing useful runs from the number eight position.

"He's has had some experience of international cricket and we'd like to see him get back to that level through some impressive performances for Notts."