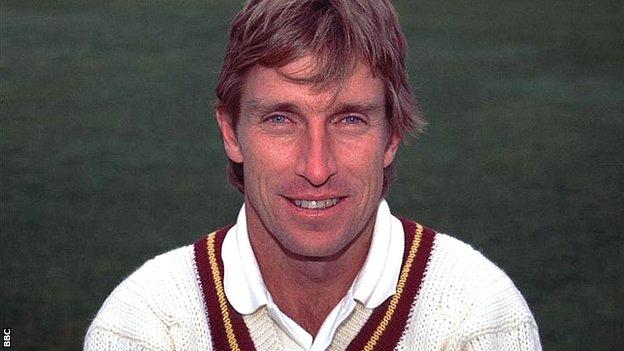 Former Zimbabwe all-rounder Kevin Curran has died at the age of 53.

Curran, who played county cricket in England for Gloucestershire and Northants in the 1980s and 90s, was the Zimbabwe national team's former coach.

Zimbabwe Cricket said he collapsed while jogging in Mutare but the exact cause of death is not yet known.

"We are still in shock, Kevin was the epitome of health and we've yet to make sense of this tragic loss," managing director Wilfred Mukondiwa said.

Curran, who played in the 1983 and 1987 World Cups for Zimbabwe, made over 1,000 runs in a season five times in the English domestic game, but had moved away from the international arena by the time his country was granted Test status in 1992.

After retiring in 1999 he had a spell as assistant coach of Zimbabwe before taking charge of the Namibian team.

Having served as the director of a cricket academy in Harare he replaced Phil Simmons as Zimbabwe coach in 2005, a position he held until 2007.

His final coaching role was with Zimbabwean franchise Mashonaland Eagles, and their chief executive officer Vimbai Mapukute said: "I have yet to meet a man more passionate about cricket in this country.

"KC had put his heart and soul into developing our franchise and had great plans for our high performance gym and other facilities.

"His passing will leave a huge void at Mash Eagles and I feel that I have not only lost a key business ally but a friend as well."