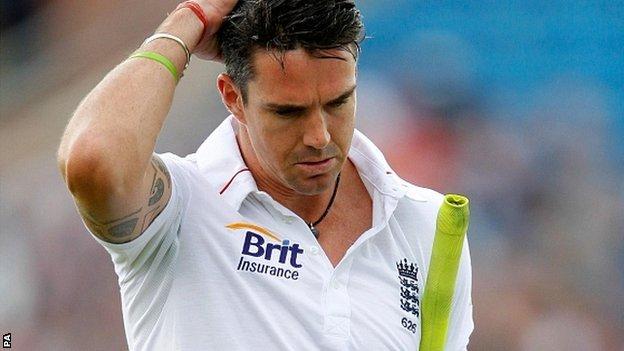 England Twenty20 captain Stuart Broad says Kevin Pietersen will be "welcomed back into the changing room".

The 32-year-old batsman was dropped in August for sending "provocative" text messages to opposition players.

But he signed a new four-month contract last week, subject to a "reintegration" period before he plays for the team.

"Once the England management have decided when he's available to return, he'll be welcomed back into the changing room," said Broad.

Pietersen is hoping to return to England duty during the four-Test tour of India, starting later this month.

Broad brushed aside fears that his return would be opposed by his team-mates.

"The team have no issues with KP coming back if the management decide he's ready to," Broad said.

"It's in their hands at the moment. There are some meetings going on behind closed doors and we're waiting to see the outcome of those. But from the team's perspective his integration will be easy.

"Ultimately we're playing cricket and we want guys who will score runs and take catches to help England win. Whatever's happened has happened.

"We pride ourselves on being a strong dressing room and I'm sure that if he came back for India or New Zealand, or whenever it is, that things will be fine within the team."

Rifts between Pietersen and his team-mates surfaced over the summer, with the batsman admitting to issues "in the dressing-room" after scoring a century in the Headingley Test in August.

Two days after Pietersen was dropped over the texts scandal, Broad issued a statement denying any involvement in a Twitter account called KP Genius that parodied the South Africa-born batsman.

Broad, who captained England in the World Twenty20, added: "I've not spoken to Kev since the Headingley Test match, but I'd have no problems playing with him or having a beer with him. It's not an issue.

"We know he's a great cricketer, he's won a lot of trophies and has been a really good team-mate for England, certainly ever since I've been playing for them.

"We know that when KP's focused on playing for England and he's happy, he's a really dangerous player."