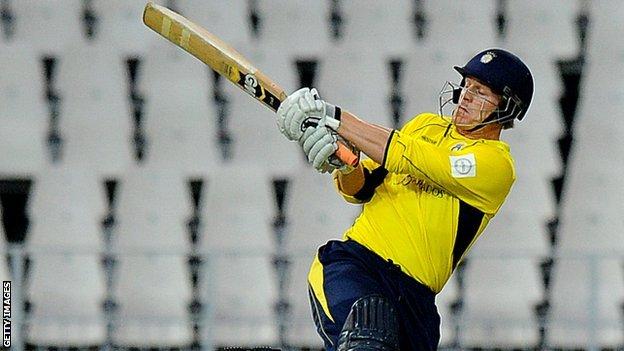 Hampshire lost by six wickets to Pakistan side Sialkot Stallions to exit the Champions League T20 with two defeats from as many games.

Glenn Maxwell hit three sixes in his 29-ball 42, building on a swift start from James Vince to take the to 143-8.

But Haris Sohail's unbeaten 63 led the Stallions to victory on 144-4.

Both sides were already eliminated after losing their opening games to New Zealand side Auckland Aces.

Hampshire began well as Vince hit three successive fours in the second over, but he was run out after a mix up with Michael Carberry (11).

Maxwell was the mainstay of Hampshire's innings and hit two successive maximums off Rana Naved-ul-Hasan, before falling to the bowling of Umaid Asif (2-42).

Liam Dawson, David Griffiths and Chris Wood all took a wicket to reduce the Stallions to 28-3 in their reply.

But Sohail and Shoaib Malik (39) put on 96 for what a proved a match-winning partnership.