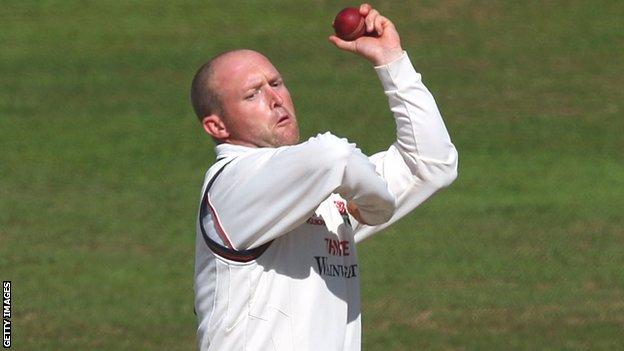 Keedy, 37, who has made more than 400 appearances for Lancashire and claimed over 800 wickets in all competitions, has signed a two-year deal.

After 18 years with the Red Rose county, Keedy said he needed to move "to fulfil ambitions".

Keedy said: "I have had a fantastic 18 seasons at Lancashire and would like to thank all the players, staff and members there for everything they have done for me.

"Winning the County Championship in 2011 was an incredible moment for both the club and myself and one that will stay with me forever.

"Working with Simon Kerrigan and Steve Parry over the last few years has been very rewarding and I feel they can go forward and play a big role for Lancashire in the future."

Lancashire cricket director Mike Watkinson said Keedy had been a fantastic servant to Lancashire over many seasons on and off the field.

Watkinson said: "At Lancashire we have up and coming spinners Simon Kerrigan, Stephen Parry and Arron Lilley all looking to stake a claim.

"With Gary being at the latter end of his playing career, he wants the opportunity of playing as much cricket as possible.

"Gary asked our permission to look at other options and he goes with our best wishes. We would like to thank him for his outstanding service to the club and we wish him well with his future endeavours."

In 2011 Keedy was approached in mid-season by Warwickshire but elected to stay with Lancashire. He finished the summer with 61 wickets as Lancashire won their first outright Championship title since 1934.