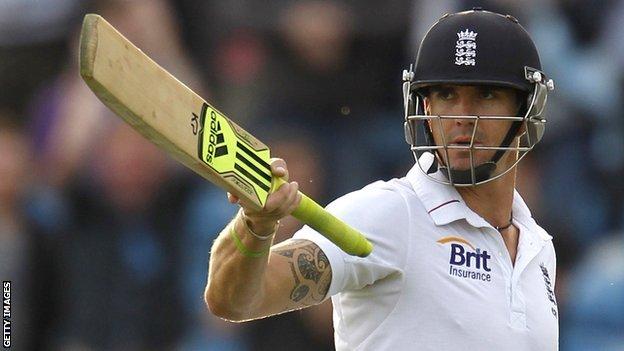 Kevin Pietersen has been added to the England squad for the tour of India.

The decision to recall the 32-year-old was made after he met with coach Andy Flower, Test captain Alastair Cook and other senior players this week.

"The meetings were constructive and cordial and all outstanding issues have been resolved," explained Hugh Morris, the England team's managing director

Pietersen, who recently agreed a new England contract, was dropped in August following a fractious summer.

The player had to apologise to former captain Andrew Strauss after sending "provocative" text messages to opposing players during the Test series against South Africa.

However, the ECB later accepted the texts were not derogatory about Strauss and the Surrey player was given a pending a successful outcome to a "reintegration" period.

After a series of successful meetings earlier this week in Oxford, England are now ready to welcome South Africa-born batsman back into the national fold before they fly out to Abu Dhabi next week ahead of their four-Test tour of India in November and December.

Pietersen is currently playing for Delhi Daredevils in the Champions League in South Africa.

"All the England players and management are now keen to draw a line under this matter and fully focus on the cricketing challenge that lies ahead in India," added Morris.

ECB national selector Geoff Miller said: "We are pleased to welcome a player of Kevin's proven international calibre back into the Test squad for such an important Test series.

"As we anticipate that Ian Bell will return home for the birth of his first child around the time of the second Test in Mumbai, the team will benefit from having an extra batsman in the squad and all players who were originally selected for the tour will fly out as planned next week.

"Kevin will join up with the squad as soon as his Champions League commitments are complete."

The final of the Champions League is on 28 October, by which time England will be at a training camp in Dubai. Their first warm-up game starts on 30 October in Mumbai.

Rifts between Pietersen, who averages 49.48 in Test cricket, and his England team-mates surfaced during the series with South Africa, when he claimed there were after scoring a century in the second Test at Headingley in August.

Two days after Pietersen was dropped over the texts scandal, Twenty20 captain Stuart Broad issued a statement denying any involvement in a Twitter account called KP Genius that parodied Pietersen.