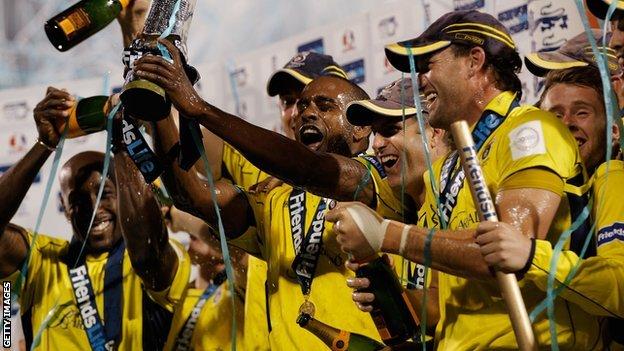 To me, the Champions League Twenty20 is a good idea and every team taking part will be desperate to win it.

The financial rewards are great and the players are getting the chance to test themselves against some of the very best from around the world. There will be plenty of players in South Africa without international experience, so this competition could be seen as the next best thing.

Some have criticised the tournament for the way the teams from India, Australia and South Africa do not have to qualify, but the boards of those countries set up the competition so they are entitled to make the rules. In time, I would hope there will be a situation where all teams have to qualify.

Much like the Indian Premier League, the scheduling of the Champions League can cause problems for counties and next year, with our domestic season not finishing until 21 September, it could mean that the English teams may not be able to take part.

I've been watching my mate Michael Vaughan on Strictly Come Dancing and have been voting for him to make sure the entertainment continues - though I must say after Bruno Tonioli's comments regarding Vaughan's backside I now look at the hanging baskets outside my house slightly differently! I was asked to take part in the very first series of Strictly, but declined - dancing and I do not get on as anyone unfortunate enough to have witnessed me on the dance floor will confirm!

Obviously it would be a huge blow if the counties were not to have the opportunity to participate in the Champions League and it will only increase the perception in certain quarters that this is another example of the England and Wales Cricket Board handling Twenty20 indifferently, but it is imperative our own domestic competitions are shown the respect they deserve.

There have been a number of calls this year for the ECB to revamp the way T20 cricket is played in this country, with some suggesting the schedule is wrong and others saying we need to see more high-profile players, both from England and abroad, taking part.

As with anything in life, there is always room for improvement, but the ECB must have got some things right because two years ago England were crowned world champions in the shortest form of the game.

I'm open-minded as to how domestic Twenty20 cricket can be improved, with one suggestion being that future tournaments may be spread over the whole summer, rather than crammed into a few weeks.

A possible downside would be that it prevents counties from signing the very best overseas players, but we've already seen, with the international calendar so congested, it's already getting harder and harder to recruit world-class stars regardless of the time of year.

If matches were spread over a whole season, more games would take place when England's players would be more likely to be available and the chance of seeing Stuart Broad taking on Kevin Pietersen or James Anderson bowling to Ian Bell would add to the attraction and help draw crowds through the gates.

Another criticism often waged at the ECB is that by retaining the 18 counties rather than opting for a franchise system it is preventing players from earning better money for playing T20 cricket.

To this, I would say that too many people are blinded by the sorts of sums that are reportedly paid in the IPL.

Yes, India is currently the financial powerhouse of world cricket, but those players who are earning in excess of $1m (£620,000) for a seven-week contract are in the minority. The reality is that there is also a large number who are paid no more than a regular county wage.

The IPL is often lauded as giving those that play in it a huge advantage and greater experience when it comes to international T20, but it should not be forgotten that India have not won the World T20 since 2007 - before the IPL even existed.

I am a huge fan of Twenty20 cricket and it is here to stay. The shortest version of the game has certainly attracted a new audience but for all the glitz and glamour that T20 leagues all over the world can offer, the ultimate goal of any professional should always be to play and excel in all forms of international cricket.

Therefore, the ECB has to do what is in the best interests of both the England team and the 18 first-class counties and we must trust they will continue to do just that.