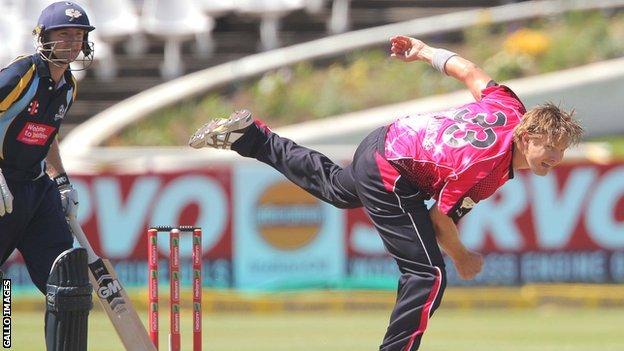 Yorkshire fell to a heavy eight-wicket defeat against Sydney Sixers in their first match of the main Champions League T20 in Cape Town.

The Tykes, who won two games last week to reach the group phase, made only 96-9 in their 20 overs.

Mitchell Starc, who played for Yorkshire in the FL t20 in 2012, took three wickets for the Australian side.

Sydney cruised home in just 8.5 overs as England's Michael Lumb hit an unbeaten 43 not out and Brad Haddin 41.

Yorkshire chose to bat first and Joe Root scored 25 off 24 balls, Phil Jaques added 21 off 19 deliveries but only Adam Lyth (18) also reached double figures as they slumped from 62-2 to 96-9.

Starc was the pick of the Sydney bowlers with 3-22, while Pat Cummins and Shane Watson took two wickets apiece.

Ryan Sidebottom had Watson caught at deep square-leg in the second over of Sydney's reply, before Haddin located Lyth in a similar position off Azeem Rafiq.

Yorkshire, the FL t20 runners-up, beat Sri Lankan side Uva Next and Trinidad & Tobago last week to qualify for the main phase of the competition.

The result leaves the Tykes bottom of Group B, with Sydney top with eight points from two matches.

Yorkshire have three games remaining in the round-robin phase and need to finish in the top two of the five-team group to reach the semi-finals.

They are next in action on Thursday, 18 September when they play Indian Premier League side Mumbai Indians in Cape Town.