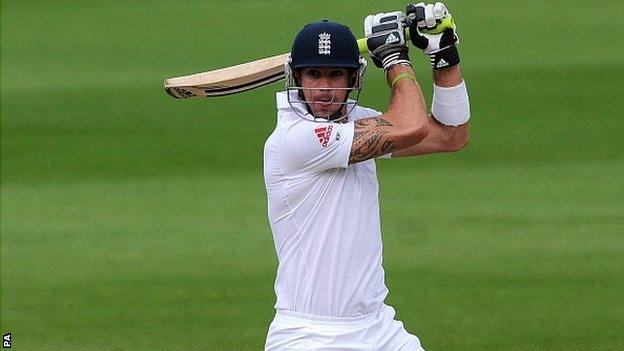 Pietersen, dropped in August for sending "provocative" texts to South Africa players, was added to the squad for the India tour after a successful "reintegration" process.

"I think [captain] Alastair Cook might benefit from this," Flintoff told BBC Sport. "He might get KP at his best.

"When Kevin's got a point to prove he usually proves it with the bat."

Pietersen first suggested he could thrive in adversity when he defied hostile crowds to score three one-day centuries against his native South Africa in February 2005.

And just when his fractious relationship with the England dressing-room was starting to surface in August, he scored a brilliant 149 to revive his side's hopes against South Africa at Headingley.

"When people get on his case he comes out swinging and scores runs," said Flintoff, who played alongside Pietersen for England between 2005 and 2009.

"We saw that when he came into the international game in South Africa and he just kept scoring hundreds. In his last innings, he got a hundred at Headingley and saved England."

After the Headingley Test, Pietersen revealed "issues" with his team-mates and said it was "tough being me" in the dressing-room.

Following his omission over the text messages, players including Stuart Broad and Graeme Swann - who criticised Pietersen's captaincy in his autobiography last year - denied any involvement in a Twitter account which parodied the batsmen.

Flintoff expects Pietersen's reintegration to be more difficult for certain team-mates than it will be for Pietersen himself.

"I think Kev will be fine," he said. "It might be a bit more uncomfortable for some of the others who have not been too kind in books, in paper reports and in interviews.

"Everyone's got an ego. Maybe there are a few clashing in that dressing-room at the minute and they just need to put them to one side and carry on.

"If Pietersen starts scoring runs and England win it will quickly be forgotten."

Flintoff, currently training for his debut fight as a professional boxer on 30 November, described Pietersen as a "different" character, but one who should be embraced within the team environment.

"He is different, but if you want Kevin the player, you have Kevin [the person as well]," he added.

"I think his qualities as a player outweigh everything. Like everyone else he needs a bit of encouragement.

"When you are as good as he is you need an arm round the shoulder and you need the backing of the team."