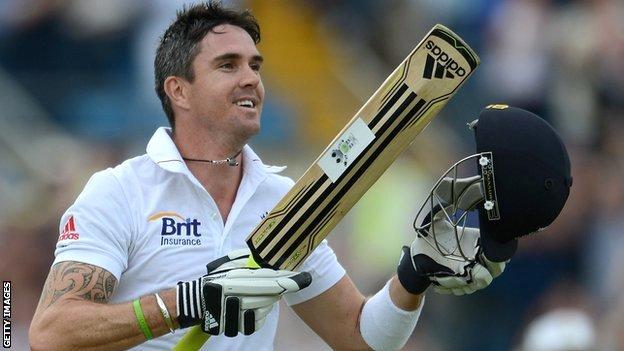 Kevin Pietersen's "reintegration" into the England side is set to be completed when he faces India A this week.

Left out of the India tour party, after meeting with coach Andy Flower and senior players.

He plays in England's opening tour match, which starts on Tuesday, when Nick Compton is set to open the batting with captain Alastair Cook.

Compton will be preferred at the top of the order to fellow uncapped batsman Joe Root of Yorkshire.

"He is down to play and will be batting at four," Flower said of Pietersen.

The three-day match in Mumbai will be Pietersen's first for England since he made a brilliant 149 in the second Test against South Africa at Headingley in early August.

"As I have always said, it's great to have world-class players in our team and, if we want to play the standard of cricket we know we are capable of, we will have to have our best players.

"As a senior batter, he is there to get runs and, off the field, to pass on his experience to the rest of the lads.

"He has played a huge amount of cricket, some 90 Test matches, and he has experience of sub-continent cricket with the IPL [Indian Premier League].

"That experience is valuable to us if we are going to get used to the conditions as quickly as we can."

Pietersen was omitted from England's squad for the defence of their World Twenty20 as discussions were held over his future.

Pietersen apologised to then captain Andrew Strauss, and Cook welcomed his return after the right-hander with the England and Wales Cricket Board and was added to the tour party.

Flower said he saw no reason why Pietersen's short-term contract would not be extended to 12 months.

"I hadn't actually thought much about the extension of his contract," he said. "We're here focusing on playing well in India; I don't envisage a problem.

"I think we can work very well together in the future and we've already started that process."

Flower said he was confident Pietersen would return to his best for England.

"It takes a little while to get back into your rhythm and top form, but he's an amazing cricketer," he said.

"I'm looking forward to him being involved. We had a long chat this morning, we've had a number of chats on the phone and of course he flew back to England just recently. I think we'll work well together."

Pietersen joined the squad in India on Sunday from South Africa, where he had been playing for IPL side Delhi Daredevils in the T20 Champions League.

Upon the team's arrival in India on Monday, England announced that Twenty20 skipper Stuart Broad had been promoted to Test vice-captain for the tour.

The first match of the four-game Test series starts in Ahmedabad on 15 November.