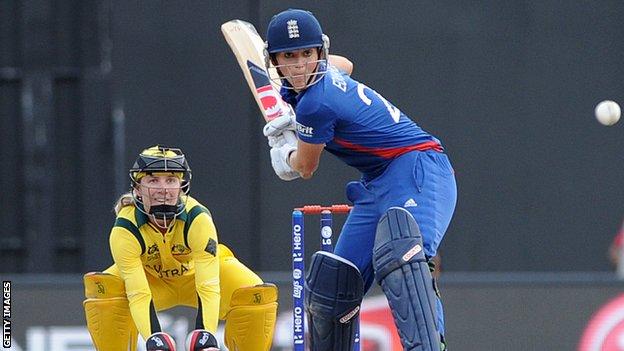 Captain Charlotte Edwards believes England's World Twenty20 final defeat by Australia will give them an "extra edge" in the 2013 Women's World Cup.

Australia retained their T20 title in Sri Lanka by beating England by four runs in the final earlier this month.

"We're all bitterly disappointed but we've got to quickly forget about it," Edwards told BBC Radio Kent.

"We've got a 50-over World Cup to concentrate on and that's quite a good thing. We've got an immediate focus."

The ICC Women's World Cup will be held from 31 January to 17 February in Mumbai, India.

She added: "We won't be dwelling on it too much.

"Hopefully it'll give us an extra edge going into that World Cup. We won't want to experience those feelings we had in Colombo."

England are the reigning 50-over world champions, having beaten New Zealand by four wickets in the 2009 final.

Despite missing out on the World T20 title, Edwards does not believe that too much can be read into Australia's victory in the shorter format.

"The Twenty20 stuff is unpredictable," she continued. "It's a bit of a lottery.

"In the 50-over games, the most skilful team and the best teams win.

"Australia are a very good team and there's not much to choose between the two.

"I've no doubt it'll be another close affair and a great event."