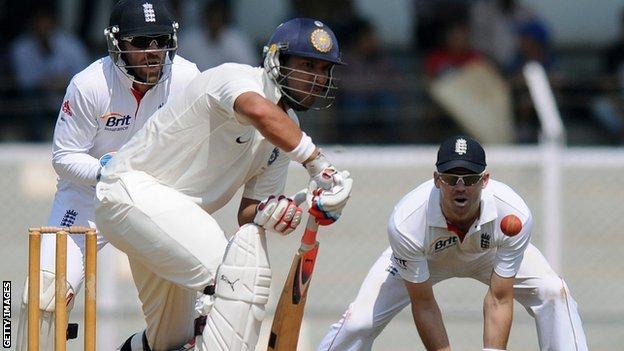 A thigh injury to pace bowler Steven Finn compounded a testing day for England on the first day of their opening tour match against India A.

Finn pulled up while fielding on the boundary before aborting the second over of his second spell in Mumbai.

He is expected to have a scan on Tuesday evening.

Bresnan was included in a three-man pace attack alongside Finn and James Anderson, with new Test vice-captain Stuart Broad rested.

Aside from Broad's omission, England's XI looked close to the team that is likely play in the first Test in Ahmedabad on 15 November, with uncapped Nick Compton named to open the batting alongside new skipper Alastair Cook.

The was listed to bat at four, with wicketkeeper Matt Prior promoted to number six to accommodate all-rounder Samit Patel.

Patel gave England a fifth bowling option, but the Notts man conceded nearly five runs an over in his figures of 1-95.

The left-arm spinner paid the price for dropping Yuvraj Singh first ball, with Yuvraj hitting two fours and a six from Patel's first over on his way to 59.

Yuvraj built on the steady work of opener Abhinav Mukund, who made 73 after Bresnan had a hand in the first two wickets to fall - running out Murali Vijay and having Ajinkya Rahane caught at gully by Pietersen.

Mukund and Yuvraj shared 56 for the third wicket, but after Mukund fell to a sharp catch at short leg by Ian Bell, it began a collapse that saw India A slide to 190-6.

However, England had the door slammed shut by a stand of 110 between Tiwary and the powerful Yusuf Pathan.

Bresnan bowled Ashok Dinda with another yorker the very next ball to give England late rewards for sticking to their task on a boundary-laden day.