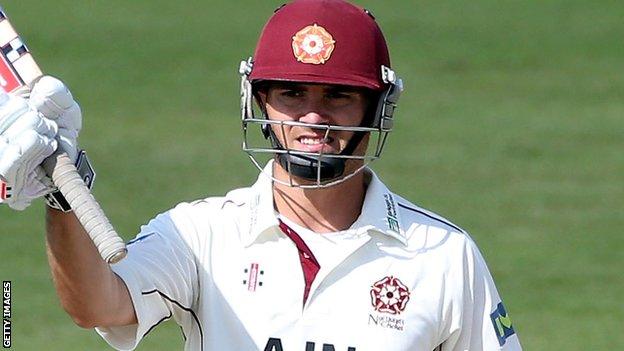 Northants batsman Stephen Peters says he is honoured to have been awarded a benefit year in 2013.

The 33-year-old former Essex and Worcestershire player has made 108 first-class matches, scoring over 7,000 runs, since joining the club in 2006.

The batsman has scored over 12,000 first-class runs, including 29 hundreds, in his 17-year career.

"I hope I'm playing for another four or five years but I'm delighted," he told BBC Radio Northampton.

"It's an honour that the club have recognised my contribution, and not just in my time so far at Northants and going forward, but over my career."

Northants Cricket chief executive David Smith said: "I am personally delighted that Stephen has been awarded a much deserved benefit year in 2013. This reflects his outstanding contribution to the game since he made his first class debut in 1996.

"He is a very popular member of the dressing room and has a big contribution to make towards Northants cricket over the coming years."

And he believes that the blend of youth and experience in the squad - after the departure of Jack Brooks and Niall O'Brien and contracts signed by Ben Duckett, Rob Keogh, Christian Davis and James Kettleborough - will lead to success.

"I think the club have made it quite clear they want a nucleus of five or six senior players and homegrown, young talent," said Peters.

"Last year was a disappointing year. I hope people keep faith with us because I think we've got some fantastic young players but also the experience of our very good senior players."