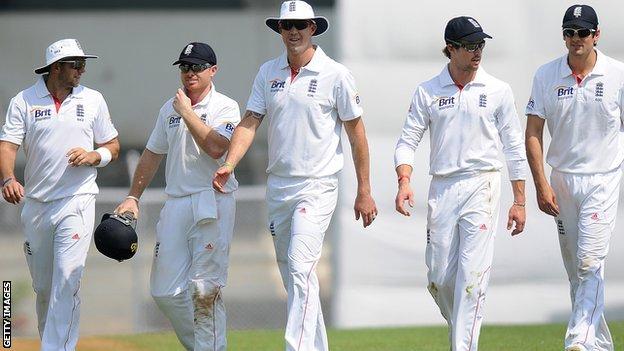 Batsman Pietersen, 32, was dropped in August for sending "provocative" texts messages to opposition players but made his return to the team in a warm-up match against India A.

"It's just like having someone who's been injured coming back into the side," said Bresnan.

30 Oct: Returns in tour match against India A

"It's pretty much business as usual. He's the same old Kev."

After a summer in which Pietersen threatened to retire from Test cricket, was dropped for the final Test against South Africa and then not offered a central contract, he returned to the England fold after apologising and holding a series of meetings with new captain Alastair Cook and other senior players.

"Everyone in the know has sat down and spoken about it," added Bresnan.

"But apart from that, for the rest of the boys, there's nothing exceptionally different.

"I don't suppose you'd be able to see from the outside looking in that it's anything other than normal.

"I'm pretty sure most of the lads in the dressing room were expecting it to be like that - and that's what it was like."

Pietersen took a catch in the gully to give Bresnan the first of three wickets as India A closed on 369-9, with Graeme Swann also taking 3-90.

England had to deal with the setback of losing paceman Steven Finn to a suspected thigh injury, with the Middlesex man leaving the field during his second spell.

"Obviously, we're disappointed one of our fast bowlers had to go off," said Bresnan, who took 3-59 from 20 overs.

"But it's one of those things where you just have to step up a bit, and each of you has to take on his responsibility.

"We're not sure what's happening. The doc will check him out back at the hotel. All we know is it's hurting, and scans will reveal more."