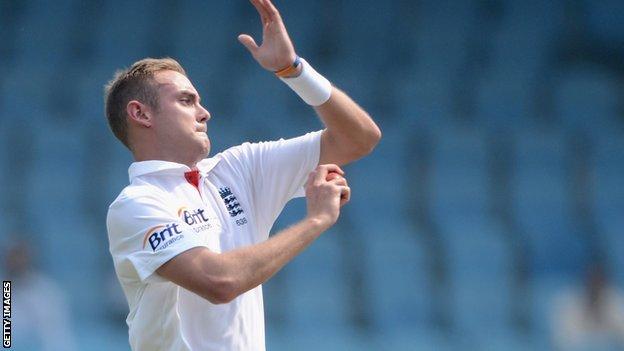 Paceman Stuart Broad will not bowl on the final day of England's warm-up match against Mumbai A after bruising his left heel during Sunday's play.

Broad, who did field, was taken for a scan after day two of the three-day game and his injury will be monitored.

Steven Finn will almost certainly miss the first Test against India on 15 November with the thigh strain which he picked up against India A last week.

It is expected to take the 23-year-old around two weeks to regain fitness.

Surrey fast bowler Stuart Meaker is likely to receive his Indian visa on Monday and join the tour party on Tuesday after being called up to provide cover.

Following the current three-day game with Mumbai A, England face a four-day match against Haryana (8-11 November) before the first Test.

However, at this stage, Meaker will act as cover against Haryana and is not expected to be formally added to the Test squad.

The Middlesex man made his England debut against Bangladesh at Lord's in May 2010 and has played 16 Tests, taking 66 wickets at an average of 28.15.