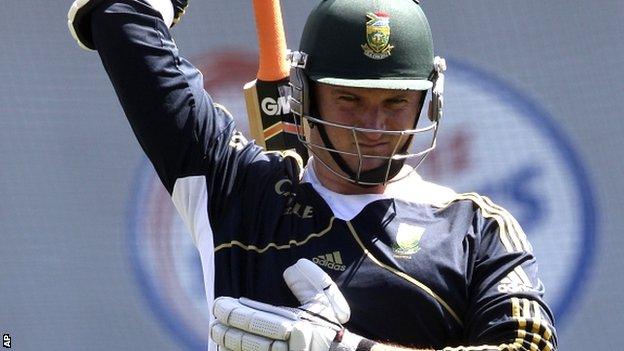 The 31-year-old, who is currently with the Proteas in Australia, set a record for 94 Tests as captain in the final match against England in August.

He said: "I am excited to be joining such a professional and talented team, during what will hopefully prove to be a rewarding and successful period.

"I will balance my new role alongside my commitments to the Proteas."

Smith became his country's youngest Test captain when he led South Africa against Bangladesh at the age of 22 years and 82 days.

He guided them to the top of the International Cricket Council Test rankings with the 2-0 victory in England this summer.

Smith, whose wife is from the Republic of Ireland, will join Surrey after South Africa's home series against Pakistan, which will finish in late March.

"When you consider the ambition shown it was an easy decision for myself and my family," he said.

"I am excited about what we can achieve at Surrey going forward and I look forward to continuing to represent my country for many years to come."

Smith will be available for the majority of Surrey's matches next season, with the club hopeful he will play in 10 County Championship matches as well as leading the side in Twenty20 and 40-over competitions.

The left-hander will be unavailable to play for Surrey while he is representing South Africa in the ICC Champions Trophy, which is being held in England in June next year.

"By signing a three-year deal, Graeme has demonstrated his commitment to Surrey on a long-term basis," the former Sussex captain told BBC London 94.9.

Smith, who spent a season at Somerset in 2005, replaces Gareth Batty as captain at The Oval.

Batty took over as skipper on a short-term basis after Rory Hamilton-Brown, who joined Sussex in September, stood down from the role in August.

Hamilton-Brown found it difficult to concentrate on cricket following the death of friend and team-mate Tom Maynard in June.

"We've had a very, very difficult summer," Adams admitted on BBC Radio 5 live. "One of our players got killed in tragic circumstances, he happened to be the best mate of the captain of the club and Rory, understandably, found it difficult to see a future at Surrey.

"We were faced with replacing Rory, we drew a list up and right at the top was Graeme Smith, some would argue one of the great captains of all time. Add to that his ability with the bat as an opening batsman and he was the number one target.

"Graeme has reached a point in his career where he has done just about everything that he could wish to have done for South Africa, he will continue in that, the schedules are very favourable, it looks very clear he will be able to play the first half of the Championship season.

By joining Surrey, Smith will play alongside England batsman Kevin Pietersen, with whom he is thought to have had a fractious relationship since Pietersen left South Africa in 2000.

"I understand there is great mutual respect," Adams insisted. "I think they've had their moments through their careers but I think it's more than healthy at the moment.

"I've spoken to both about each other and they're both looking forward to the prospect of lining up with each other."