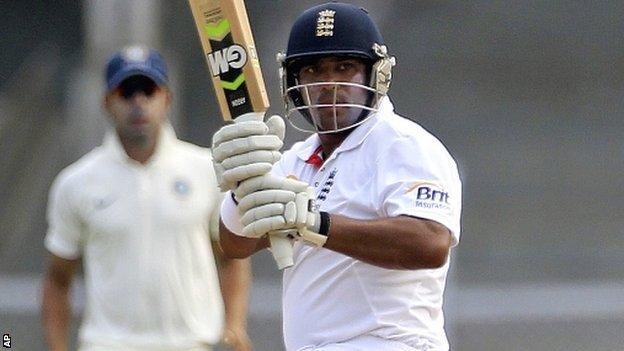 All-rounder Samit Patel scored 104 as England drew with India A in their opening tour match in Mumbai.

England were bowled out for 426, a lead of 57, before the hosts replied with 124-4 in their second innings.

Nottinghamshire man Patel's maiden England century puts him in the frame for the first Test in Ahmedabad, which starts on 15 November.

"It was a good workout for England, who started this match on the back of an overnight flight from Dubai and very little sleep! The big concern is Steven Finn, who will miss the next tour match starting on Saturday with his thigh strain. But Samit Patel bolstered his claim for the number six spot in the Test team. He bowled tidily in the second innings and took a wicket as well. The only batsmen who didn't get much time in the middle were Compton (0), Bell (5) and Pietersen (23), so they will likely feature again in the next game. After his century, Cook could possibly be rested in order to let Joe Root have a bat, what with vice-captain Stuart Broad certain to play."

Captain Alastair Cook, 112 overnight, made 119 and Matt Prior 51, while James Anderson removed both India A openers.

"All the stuff that's gone on, it's all well and good saying 'we're going to draw a line under it'," said Anderson, referring to Kevin Pietersen's dropping and subsequent recall into the England team.

"But I think that's actually happened, and it just seems to be back to normal in the dressing room and on the field."

About Patel, whom it appears has been pencilled in to bat at number six in the Test series, Anderson was effusive in his praise.

"I thought he was outstanding in this game, showed great temperament and just looked calm and controlled," said Anderson.

"He played at his own tempo - with 'Cooky' at the other end, playing at his, which is very different to Samit's - and I thought they complemented each other very well.

"He [Patel] is a very good all-round player. He plays spin very well. He was very controlled and composed out there, and that's what you need in these conditions."

The India selectors declined to pick a specialist spinner for this match but part-time slow left-armer Yuvraj Singh took 5-94.

Patel, who resumed on 82, took 161 deliveries for his century and shared a stand of 169 with Cook for the fifth wicket.

Prior produced a series of trademark cuts on his way to a run-a-ball half century and Tim Bresnan made 33 not out from 67 deliveries.

Anderson finished with 2-20 from seven overs in India A's second innings, while Patel and Bresnan took a wicket apiece.

Ajinkya Rahane made 54 from 137 balls as the game meandered towards a draw after tea.

England's next fixture is a three-day match against Mumbai A, starting on Saturday.

Pace bowler Steven Finn will not take part after injuring a thigh early on the opening day at the Brabourne Stadium.