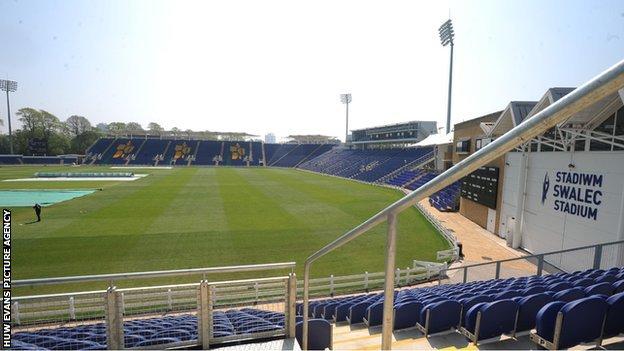 Glamorgan will play a warm-up game against one of the eight top cricket nations ahead of the ICC Champions Trophy, part of which is being staged in Cardiff.

The county could play South Africa, India or even England, who all have Trophy games at the Swalec Stadium.

Glamorgan last played against a full touring side in 2002 against Sri Lanka.

"Glamorgan will play one of the eight teams as a warm-up game," confirmed Glamorgan chief executive Alan Hamer.

"That will add a bit of relevance to the competition [with] our supporters [seeing] Glamorgan play an international match for the first time in many a year."

This is a great time for Welsh sport, and to be able to mark Glamorgan's 125th anniversary in this way is a real accolade for us

The Champions Trophy is being staged at three grounds during June of 2013 including the Swalec Stadium, Edgbaston and The Kia Oval.

The Swalec is hosting five matches including England's game with New Zealand on 16 June and one of the semi-finals on 20 June.

Cardiff will also open the event when current ICC World Cup holders India take on South Africa, which is expected to attract a global television audience of 100 million viewers.

Glamorgan president David Morgan said it was important that Cardiff would stage part of the tournament.

"The opportunity to stage prestigious ICC Champions Trophy fixtures in Cardiff is an exciting one," Morgan insisted.

"Players, officials and supporters alike are immensely fond of the 50 over one-day international format and this event sees the best of the best in action.

"This is a great time for Welsh sport, and to be able to mark Glamorgan's 125th anniversary in this way is a real accolade for us and recognition for the successful way international cricket has been staged in Cardiff.

"With two games on weekends... I hope the tournament appeals to cricket supporters across Wales and the west."

Due to contractual issues the Swalec Stadium will be renamed the Cardiff Wales Stadium for the tournament.