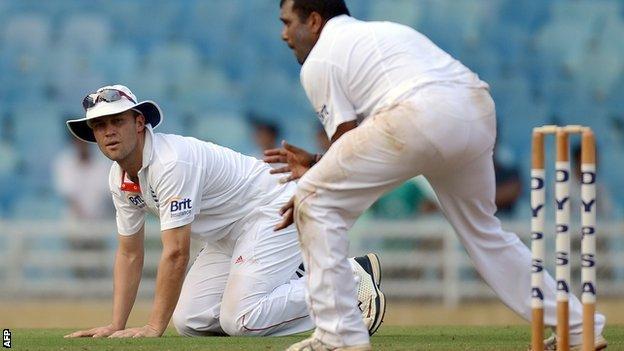 England's bowlers were made to struggle on the second day of their tour match against Mumbai A.

After England declared on 345-9, the hosts moved to 232-4, with India Test batsman Cheteshwar Pujara making 87.

He shared 163 with Hiken Shah (84 not out) as the tourists went more than 57 overs without a breakthrough.

"Pujara showed application, batting for over four and a quarter hours on a day of attritional cricket. None of the England bowlers stood out when the ball went soft, though Joe Root did show that he has got more than one string to his bow. The tourists will hope to make further inroads in the morning so that Root and Nick Compton can have another bat."

The day might have been different for England had Anderson held on to a sharp chance at slip when Pujara was on 22.

As it was, Pujara, who has replaced the retired Rahul Dravid as India's Test number three, looked strong off his legs and solid in defence as he built an assured partnership with Shah.

"I haven't faced many of England's bowers in the past so it was important to get some practice before the Test series," said Pujara. "I was very confident against all the bowlers.

"It won't be the same in the Test match, because I think the intensity will be higher.

"I think their fielding was not quite up to the mark here, but will be in the Test."

Anderson found some swing with the new ball, while Broad's opening spell appeared to be enough to refute suggestions he is not match fit, only for the stand-in captain to be taken for a scan on a heel injury at the close.

It was first-change seamer Onions that got the first breakthrough, having Bhavin Thakkar caught behind, with Root's occasional spin snaring Shikar Dhawan at slip just after lunch.

But from there, Pujara and Shah set an expert tempo to grind England into the ground. Scoring only 67 runs between lunch and tea, they took advantage of tired minds and bodies in the evening session to add a further 122 before the close.

Broad, leading in place of the rested Alastair Cook, favoured spin over seam and it was slow left-armer Panesar that eventually got the wicket England needed.

Finding some sharp turn, he had Pujara held by Anderson in the same slip position where the right-hander had previously been put down early in Panesar's spell.

Anderson then got the second new ball in his hands to have Suryakumar Yadav caught behind by Jonny Bairstow just before the close.

England had earlier made slow progress with the bat after resuming on their overnight 338-6.

Only seven runs came in as many overs, with Broad playing across the line to by trapped lbw by Thakur and Samit Patel edging Kshemal Waingankar behind for 60.

And, after Onions was mystified to be given out caught behind without scoring, Broad declared.