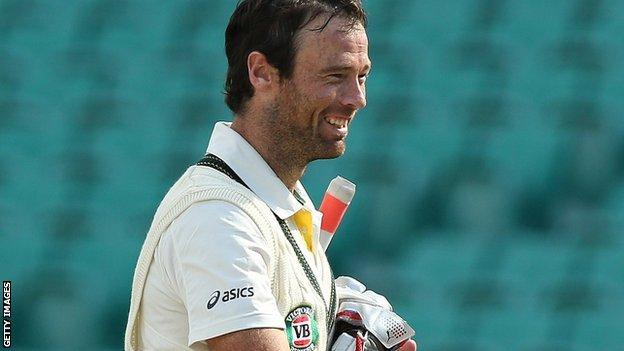 Victoria opener Rob Quiney will make his Australia debut in the first Test against South Africa on Friday after Shane Watson was ruled out because of a calf injury.

"Only time will tell but I'm hoping my maturity will help me," he said.

"He won't be fit enough come Friday," said Australia coach Mickey Arthur. "We wanted to be really decisive. We didn't want this to play out the whole week.

"We are comfortable we have the players and we have the cover. We're relaxed, we're calm. We're excited and really hungry for some success."

Watson has become a key all-rounder for Australia in all forms of the game and was named player of the tournament at the World Twenty20 in October.

Quiney made scores of 85 and 11 not out for Australia A in their three-day match against the Proteas which ended in Sydney on Sunday.

"I think he deserves his opportunity," Arthur said. "Over the last couple of seasons he's been prolific, he's probably been the stand-out domestic player."

"I certainly think that players performing need to get picked, guys that have done the hard yards. Rob has certainly done that."

Arthur said he was "very confident" former captain Ricky Ponting will be fit despite injuring his hamstring playing for Tasmania against the tourists.