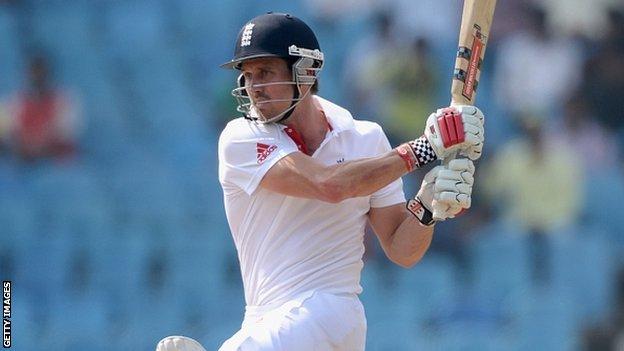 Nick Compton staked his claim to open the batting in the first Test against India with a half-century as England drew their tour match with Mumbai A.

After successive failures, Compton compiled 64 not out from 162 balls as England reached 149-2 in their second innings, with Ian Bell 28 not out.

Joe Root, Compton's rival to open in the Tests, was dismissed for 24.

Earlier, spinners Monty Panesar and Samit Patel took three wickets apiece as Mumbai A collapsed to 286 all out.

"Compton has played his way into prime position to be Alastair Cook's opening partner in the Tests. Over the course of his unbeaten three hour innings he showed the sort of grit, patience and dogged concentration needed to play long innings on slow pitches. The Mumbai A spinners were very much part time, but he just got on with the job, putting aside any doubts he might have had after a duck and one in his first two England innings."

The home side's slump from an overnight 232-4 gave the two men competing to succeed former captain Andrew Strauss at the top of the order plenty of time to make their case.

Root began brightly, striking five fours either side of lunch, but he came unstuck in the twenties when he played no shot at a Shardul Thakur inswinger and was trapped leg before wicket.

A slow passage of play followed as Compton and Jonathan Trott added 57 for the third wicket in just under 25 overs.

Trott looked untroubled until he played back to an off-spinner from Suryakumar Yadav and was lbw for 30.

Bell was dropped at leg-gully from his first ball but began to find some fluency in an unbroken stand of 56 with Compton.

The Somerset opener, grandson of England legend Denis, took more than three hours to reach his fifty from 142 balls.

But his display of grit and determination may have pushed him ahead of Root with just one warm-up game - a four-dayer against Haryana starting on Thursday - before the Tests.

"I knew I needed to just spend some time out there and that's generally my process," Compton told BBC Sport.

"The first two games probably couldn't have gone any worse and you can either over-analyse it or just go back and have a laugh.

"It wasn't the way I intended it to go but today was just about getting back into stronger positions, especially on the front foot.

"I've worked really hard behind the scenes and I'm glad a little bit of that work has paid off. It's just nice to tick over, get the feet going and get a not out score there."

England had earlier wrapped up the home side's innings by taking their last six wickets in 90 minutes.

With captain Stuart Broad fit to field but not bowl after a scan revealed bruising to his left heel, Graham Onions pressed his claims by having Hiken Shah caught behind for 92.

Slow left-arm spinners Patel (3-44) and Panesar (3-64) then benefited from some reckless shot selection by the hosts as they rattled through the last five wickets.