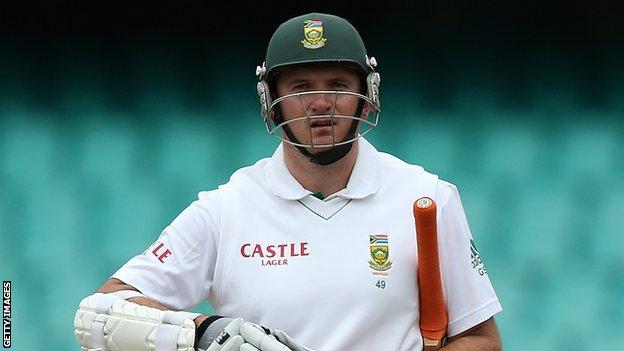 Former Surrey batsman Mark Ramprakash expects the signing of Graeme Smith to provide a huge boost for the club.

Ramprakash told BBC London 94.9: "It's a seriously bold statement by Surrey to get someone of the calibre of Graeme.

"He is a top batsman but his influence goes well beyond making runs. He is one who leads by example and has real mental strength."

Smith has captained South Africa in a record 94 Test matches since being appointed in 2003 and led the side to the top of the International Cricket Council rankings this summer after victory in the series against England.

Ramprakash, who spent 12 years playing for Surrey before announcing his retirement in July, thinks the Oval side will reap the benefits of Smith's leadership abilities.

Having seen things not quite work out with Rory Hamilton-Brown, Surrey have addressed that in a really serious way by getting someone who is world renowned

"Graeme's an interesting character and personality," he said.

"It's particularly pleasing because we don't often see the top stars [of the game] in county cricket.

"The fact he has signed for three years is a real statement of intent for him to come and shape the Surrey staff and playing members into something that is more long-lasting than a flash in the pan."

Gareth Batty finished the summer as acting captain after Rory Hamilton-Brown, who has since moved to Sussex, stood down from the role in August following the death of team-mate and friend Tom Maynard.

"It will be a very interesting dynamic between Graeme and the director of cricket, Chris Adams," Ramprakash continued.

"When Chris was appointed, I felt he was very dominant. He made all the decisions in the direction of where the cricket was going.

"He made a very bold decision in making Rory Hamilton-Brown captain and unfortunately things didn't work out.

"Here, they have gone to almost the other extreme in getting a hugely experienced captain.

"Chris has said he's one of the best captains of all time and [I think] he's up there in that calibre."

Ramprakash believes the arrival of Smith could give Surrey a significant boost after a turbulent 2012 season which saw them only avoid relegation to Division Two of the County Championship in the penultimate game.

"Surrey would have thought long and hard about what direction they were going to go in," Ramprakash said.

"I can see a correlation with Justin Langer, who did a great job captaining down at Somerset.

"He opened the batting, was a very combative player and a tough personality. Along with the coach Andy Hurry, he had a bit of a legacy.

"Somerset have been competing right at the top of the domestic game for a number of years and I'm sure Surrey are hoping that's what will happen at the Oval."