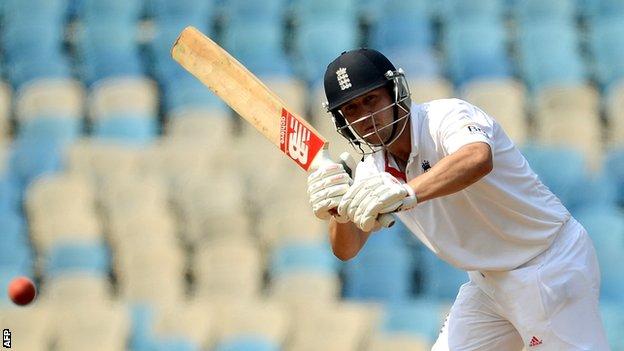 England batsman Jonathan Trott says he has had no serious talks about opening the batting in the India Tests.

The Warwickshire right-hander is sure he will remain at number three, with either Nick Compton or Joe Root partnering captain Alastair Cook.

"There's going to be someone making their debut and whoever gets that spot will do a great job," Trott said.

Uncapped Compton and Root will press their claims in the final tour match against Haryana starting on Thursday.

Somerset's Compton increased his chances of beating Yorkshireman Root to the opener's slot for next Thursday's first Test in Ahmedabad with 64 not out against Mumbai A, but Trott says whoever is selected will be have the support of the rest of the team.

"There have been a few discussions [about me opening] but that's mainly with media people," he said. "There's not been much debate or talk about that in the dressing room.

"I've spoken to Alastair and [coach] Andy [Flower] and nothing's really been spoken about that. There's obviously competition with regard to making runs at the moment so whoever opens will get full backing from everyone in the team."

Trott is relishing the challenge of beating India in an away Test series, something England have not done since 1984-85.

"The whole Indian team is really experienced," he said. "You have the most capped player in Sachin Tendulkar and there are a few players who have come in since the tour of England and done really well.

"You play cricket to come to places like India with fanatical support and if you can come here and win you you've done it the right way."

Trott's Warwickshire team-mate Ian Bell has admitted that missing the second Test to fly home and be at the birth of his first child will make his tour a tough one.

"Obviously in the back of your mind you are thinking of home and the excitement of the next couple of weeks," he said.

"But it is also important to get the cricket right. It is a bit tricky but I want to make sure that while I'm here I'm doing everything I can to score runs in that first Test match."

Meanwhile Graham Onions says he feels ready to play his first overseas Test in nearly three years if through injury.

"I'd jump at the opportunity to put the England shirt on and play again," said the Durham fast bowler. "India is a fantastic country, a fantastic place. It's going to be tough but I feel ready. I feel confident that if I do get an opportunity to play then I'll take it with both hands."