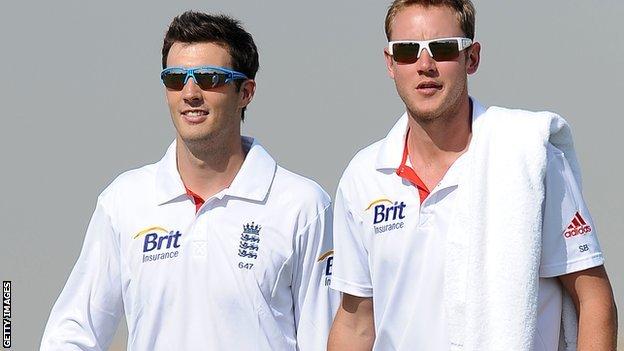 England batting coach Graham Gooch admits there is a "big question mark" over whether fast bowlers Stuart Broad and Steve Finn will be fit for the first Test against India.

Finn has not played since picking up a thigh strain against India A last week, while Broad is nursing a bruised heel.

Both will miss England's final warm-up game from Thursday, with the first Test in Ahmedabad starting a week later.

"It puts a big question mark over them, that's fairly obvious," said Gooch.

England's preparations for a crucial series have been disrupted by the injuries to two of their key bowlers.

Finn pulled up while fielding on the boundary before aborting the second over of his second spell against India A on 30 October and sat out the second warm-up against Mumbai A.

Broad, who was rested for the tour opener, only bowled 10 overs in the latter game before suffering what scans revealed to be bruising to his left heel.

"It's not ideal," Gooch told BBC Sport. "Broad has the sort of injury that is niggling and hanging around a bit.

"Steven Finn is making good progress, back running and doing a few things. We'll have to see how they come on."

If Finn and Broad are ruled out, pacemen James Anderson, Tim Bresnan and Graham Onions will vie for places in the team for Ahmedabad.

Surrey pace bowler Stuart Meaker, 23, has arrived as cover and could play in the four-day game against Haryana.

England are expected to recall captain Alastair Cook, batsman Kevin Pietersen and wicketkeeper Matt Prior for the Haryana match after all three were rested for the second game.

And Somerset batsman Nick Compton could be offered a chance to cement his place as Cook's Test opening partner after his unbeaten 64 against Mumbai.

"Compton's an experienced cricketer and I'm delighted he's been selected for this tour," said Gooch.

"He's come from Middlesex to Somerset, looked at his game and upgraded his game. He's been a heavy scorer in county cricket and he's gained selection on merit by scoring runs.

"If he gets the opportunity, from what I've seen I think he would have a chance of doing very well in the Test."

Despite his ringing endorsement of Compton, Gooch insisted Yorkshire's Joe Root remained in the reckoning despite modest scores of 28 and 24 in his only tour match.

"Root will certainly be discussed," he said. "He showed up well and bowled quite well, which is a massive bonus for him going forward with his career. I don't think he's out of contention."