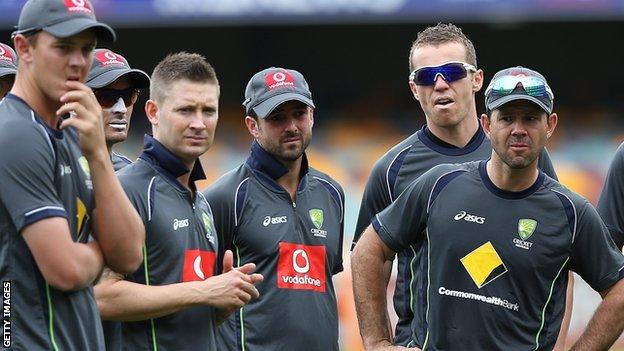 For around 15 years, there was great order to Test cricket. Australia were the undisputed kings and the rest of the world was left to battle it out for the minor placings.

Now, we live in confusing times.

In little over 12 months, three different sides have held the number one ranking, with the previous two incumbents surrendering their crowns in meek fashion.

India were whitewashed 4-0 in England, with Andrew Strauss's men then suffering a tumultuous year at the top which was ended with defeat by the impressive South Africa.

The manner in which the Proteas hammered England suggested the rightful kings now sit on the throne. A record of only one series defeat in 20 and the fact they are unbeaten away since 2006 provide the statistics to verify their status.

However, Graeme Smith's side could lose top spot to Australia in a three-Test series that begins at the Gabba on Friday.

For England fans, whose last impression of the Aussies was a glorious Ashes victory down under, the obvious question arises: How can Australia be in line to be world number ones again?

"The rankings set-up has always been confusing," former Australia opener Matthew Hayden told BBC Sport. "I don't want to give too much credit to the rankings but I certainly love that these sides are going head to head at this particular stage."

But perhaps Australia's claim to be the best in the world is not all that fanciful. Apart from home and away Ashes defeats, their only series loss since early 2009 came in India, a place where England are about to find out just how hard it is to compete.

In that time, the Aussies have won one series in South Africa and drawn another. Since Michael Clarke was put in charge after the Ashes humiliation of 2010-11, they are unbeaten in five series, winning three.

"I know whenever we were the number one team in the world it just meant every time the opposition played you they wanted to knock you off," said former captain Ricky Ponting.

"We're really excited about that and looking forward to that challenge. I know if we play our best, we'll give South Africa a hell of a scare - that's for sure."

Australia's improvement has coincided with the emergence of a number of young pacemen to complement the more experienced Peter Siddle, Ryan Harris and Ben Hilfenhaus.

The rise of James Pattinson, Pat Cummins and Mitchell Starc has led Cricket Australia Centre of Excellence coach Stuart Law to state that the Baggy Green bid to regain the Ashes in 2013 will be built on "pace and aggression".

In the meantime, they must match up to the scintillating South Africa trio of Dale Steyn, Morne Morkel and Vernon Philander.

"This is the best bowling outfit Australia have had since the retirements of Glenn McGrath and Shane Warne," added Hayden, who scored 8,625 runs in 103 Test matches. "It's well-balanced, different and has all the sting in the tail that it needs.

"I think it can really match South Africa, but, having said that, South Africa have the best bowling attack since the Allan Donald-Shaun Pollock era.

"For that reason, the focus will turn to what the respective batting line-ups can do against these strong bowling attacks."

If that is the case then, on paper, Australia look to be at an instant disadvantage when taking on the likes of Jacques Kallis, Hashim Amla and AB de Villiers.

A calf injury to Shane Watson has meant a call-up for uncapped Rob Quiney, leaving the 30-year-old, David Warner and Ed Cowan to form a top three with only 16 Test caps between them.

Australia's South African coach Mickey Arthur believes that he has "the best top six available" and that the inclusion of an extra left-hander in Quiney is a boost because "it's not a secret Dale Steyn bowls better to right-handers than left-handers".

However, Hayden believes the inexperience of the top three could leave the long-established middle order of Clarke, Ponting and Mike Hussey with plenty to do.

"We are exposing an inexperienced top order to a world-class attack," said Hayden, who played his final Test against South Africa in 2009.

"Four, five and six are pretty solid and have really got to do the bulk of the work, especially when it gets a bit tricky and Australia are under pressure."

For Ponting and Hussey, the veteran pair can both expect to be in line to tour England next summer, which in Ponting's case would be a fifth Ashes trip.

Both 37-year-olds had success in the win over India in the last Australian summer without quite reaching the same heights on the tour of West Indies, but have the advantage of being under no great pressure from the younger generation.

"They are both important as long as they are performing," continued Hayden. "Any culture has to have experience and a succession plan and in that succession plan you have youth that can be tutored.

"The expectations are lofty, we are ruthless when it comes to performance and the rug will be pulled out from anyone if he wasn't performing to the standards that are expected in this cricket team."

After South Africa's win in England, the Proteas' trip down under provides a good barometer ahead of back-to-back Ashes series in 2013-14, with Hayden admitting the Aussies have England "in the crosshairs".

With Australia also travelling to India in the new year, there is scope for more movement at the top of the world Test rankings, continuing the confusion surrounding which nation rules the longest form of the game.

However, come July and the start of 10 Ashes Tests in seven months, there will be no room for doubt. In a battle as old as Test cricket itself, world rankings will count for nothing.