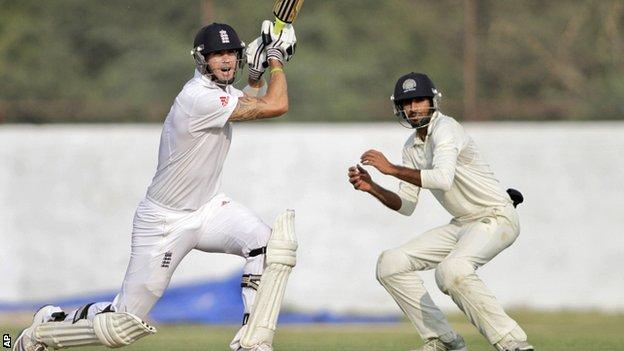 Kevin Pietersen hit a stylish century as England ended day one of their final warm-up match against Haryana on 408-3.

In his second innings back since being dropped for allegedly criticising team-mates in text messages to South Africa players, he hit 16 fours and three sixes in making 110 from 94 balls.

The first Test of the series with India starts on 15 November in Ahmedabad.

Compton, the grandson of legendary England batsman Denis, began his first senior tour with scores of nought and one but his second successive half-century could secure his place in the Test side ahead of Joe Root, who made 28 and 24 in his only appearance to date.

Batting together for the first time, Cook and Compton guided England past 100 before lunch, with all but one over in the morning session bowled by seamers.

Cook struck a succession of early boundaries, including three in one over, before edging a cut to wicketkeeper Sandeep Singh, who took the catch standing up to the wicket off the very first delivery after replacing the injured Nitin Saini.

Compton, who drove impressively through the off side and showed good use of the feet in striking nine fours from 144 balls, reached his half-century with a six off spinner Jayant Yadav.

Captaining Haryana, India's frontline spinner Amit Mishra did not bring himself into the attack until the 51st over, with the tourists 211-1.

But it took him only seven deliveries before he broke through, trapping Compton leg before with a quicker delivery.

After giving a sharp return chance to Yadav on 42, Pietersen, who made 23 on his return to the team against India A last month, survived again on 85 thanks a misjudgement from Amit Vashisht in the deep on the leg side.

But he played a series of imperious drives and pulls, and unveiled a new stroke - a form of reverse scoop to manufacture runs fine on the off side - to reach three figures from 86 balls before retiring hurt soon afterwards with slight signs of cramp in the hot conditions.

Bell, who scored only nine runs in his first two innings on the tour, struck a six in the first over he faced, passed 50 with another maximum and shared an assured century stand with Pietersen.

"To score 400 in a day is not going to do us any harm and it's just trying to create good habits," the Warwickshire batsman told BBC Sport.

Asked about Pietersen leaving the field, he quipped: "I think he was just trying to get away from running quick singles.

"I think he's fine and he'll be really happy with the way he played today. I know the team is, and it's a really happy camp."