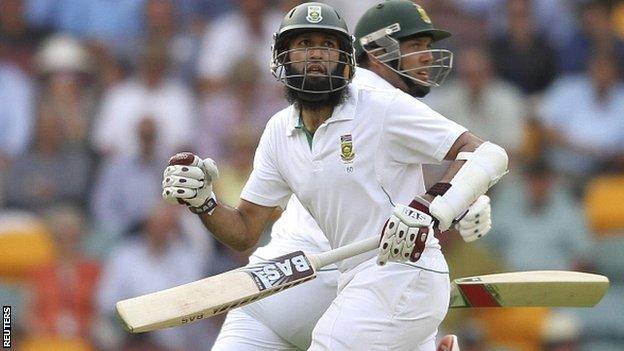 An unbroken century stand between Hashim Amla and Jacques Kallis put South Africa in charge of the first Test against Australia in Brisbane.

Amla and Kallis made 90 and 84 not out respectively as the tourists, who chose to bat, closed day one on 255-2.

The only wickets to fall were captain Graeme Smith, lbw for 10, and Alviro Peterson, caught at mid-on off spinner Nathan Lyon for 65.

It was a rare opportunity for the home side to make a breakthrough on an afternoon dominated by Amla and Kallis, the batsmen who scored 744 runs between them in the summer's three-Test series in England, which South Africa won 2-0.

James Pattinson, who needed the help of the decision review system to remove Smith, after umpire Billy Bowden had given the opener not out, subjected Amla to some difficult moments early on.

However, Amla survived before showing the elegant strokeplay that saw him average more than 120 against England, driving Lyon for six before lunch.

Peterson edged past 50 before cutting Ben Hilfenhaus for four and pulling Siddle to the boundary, but he was out in the next over, caught by Mike Hussey, to leave the visitors 119-2.

Amla took the attack to Australia and reached his fifty off 108 balls, while Kallis got off the mark with a driven four through mid-off off Lyon.

Siddle thought he had broken the partnership after tea when he had Kallis caught by Lyon off a leading edge, but a no-ball was called.

He then dropped Amla off his own bowling and both players took advantage as Kallis reached 50 off just 63 balls. The pair's partnership reached 136 before bad light stopped play 10 minutes early.