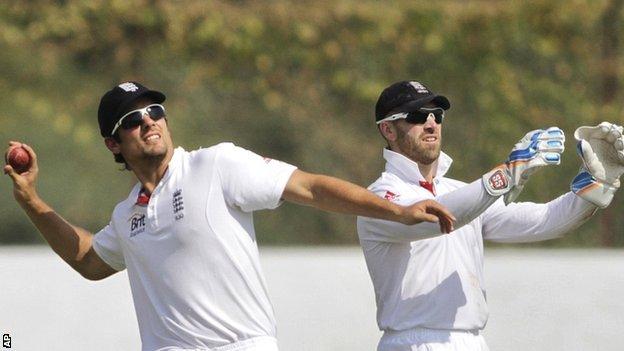 England had contrasting fitness news on the second day of their final warm-up match as Haryana closed 349 runs behind on 172-4 in Ahmedabad.

Wicketkeeper Matt Prior was taken ill and the Indian Cricket Board gave special dispensation for Jonny Bairstow to replace him behind the stumps.

However, the injured Steven Finn was able to bowl in the adjacent nets.

Finn has not played since suffering a thigh injury in the opening match of the tour against India A last month, but he was able to test the problem and could yet come into contention for the first Test against India in Ahmedabad on Thursday.

Prior had already left the field in discomfort but was forced to return after the umpires and match referee refused to endorse his substitution behind the timbers by a player not already involved in the match.

Although technically a contravention of first-class regulations, at England's behest, and in the absence of a suitable replacement among those who started the match, the BCCI decided common sense should prevail.

After Ian Bell added only five to his overnight 57 before being caught at slip when advancing down the wicket, Patel enhanced his claims for a place in the Test team by reaching his half century from 77 balls during a brisk stand of 69 for the sixth wicket with Prior.

It was a tough task for England's bowlers on a batsman friendly pitch. There was much interest during the evening session, though, when Finn started bowling off his full run up in the adjacent nets. A couple of monkeys who gambolled onto the outfield also provided a moment of levity during an otherwise attritional few hours play.

Patel hit 10 fours in reaching his fifty and 13 in total, while the wicketkeeper struck five fours and two sixes, needing only 36 deliveries for his 41, before he was struck by a stomach bug.

The innings quickly folded after Prior was stumped, with the final five wickets falling for 14 runs.

With Stuart Broad also injured and James Anderson rested, England's new-ball pairing was Graham Onions and Tim Bresnan, who claimed the first wicket in the eighth over when Nitin Saini was deceived by a short ball and popped a simple catch to cover.

Rahul Dewan, dropped down the leg-side by Prior in the first over from replacement seamer Stuart Meaker, shared a composed second-wicket stand of 97 with Sunny Singh, who reached his fifty from 72 balls with his 10th four.

Patel had Singh (55) caught at slip by Jonathan Trott, who took another catch, this time at second slip, when Bresnan found the edge of Abimanyu Khod (3).

Monty Panesar prised out Sachin Rana (6) lbw late in the day but Dewan could not be dislodged, batting through two sessions and still undefeated on 77 after 182 balls spread over more than four hours.

"It's difficult to take wickets over here anyway but that one seems to be a different league in batter-friendly," said England all-rounder Bresnan, who hopes he has impressed sufficiently to earn a place in the Test side.

"I've bowled pretty well, got a few wickets, got a few runs in the first game so I think I've got a good chance."

Asked about Finn's improvement in fitness, Bresnan said: "Finny when he's fit and firing should be able to walk into any Test side in the world, 90-plus mph coming from 6ft 7, so it's a massive boost. There's no reason why he shouldn't be available for selection, he's going to get some work and personally I think he'll be fine."

On Prior's ailment Bresnan added: "I think he's feeling a little better, I know how he feels, I had it a couple of days ago, but I'm sure it will be fine."